Who are the Top 100 Social Media Power Influencers for 2015?

StatSocial's list, released Tuesday, demonstrates the power of social media influencers by measuring the influence and interests of their real followers, not bots, that are active in social media across Twitter.

The list of the top 100 social influencers, based on a measurement StatSocial calls "Pull," measures two degrees of separation -- the influence of the followers of an account and the connections of those following the followers.

As for the ranking, Guy Kawasaki came in at No. 1 on the list with an Adjusted Pull of 1,677. While Kawasaki has a massive Twitter following -- about 1.44 million -- most of his followers are interested in general topics. About 70% are not active or interested in social media.

Robert Scoble ranks No. 2, with about 437,000 followers, yet his Adjusted Pull of 1,668 nearly equals Kawasaki's. Unlike Kawasaki, Scoble has a high percentage of followers interested in social media-related topics.

Ann Handley, Jeff Bullas, Glen Gilmore, Warren Whitlock, and Seth Godin round out the top 10 in the social media influencer ranking. The list excludes journalists, putting Danny Sullivan in the category of tech maven, since he appears in the top 20. Others include Lee Odden, David Szetela, and Melinda Emerson. (Access the complete list here.)

In the Agencies category, Ogilvy came in at No. 1, TAXI, No. 2 and Razorfish, No. 3. In the Interests' category, audience favorites include clothing, national news and marketing, respectively. TV Networks rank PBS No. 1, CNN No. 2 and E!, No. 3.

The measurement eliminates spam and business accounts. The ranking provides a breakdown in raw percentages of specific interests, such as marketing or entertainment of followers. Of the top 10 influencers on the list, eight are men. All have an adjusted Pull rate of between 1,000 and 2,000.

1. Social helps paint a better picture of a brand and influencer. Brands like TED and Etsy are not usually seen as "top" brands, but they have some of the largest social communities.

2. Passive audiences matter. They might not be active on social media, but they read emails and visit Web sites.

3.  Comparing an audience to the average lets social media mavens identify what makes an audience unique. 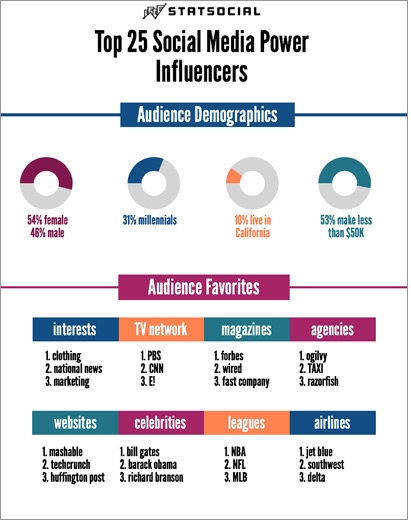