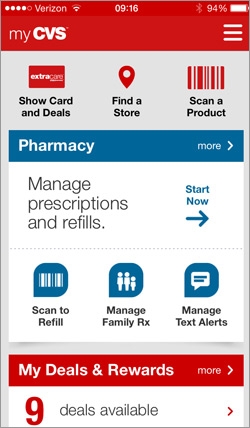 In a bid to win more consumer engagement both in and out of its stores, CVS is retooling its m-commerce approach. The retailer, which claims the largest loyalty program in the U.S. with one out of three shoppers carrying its ExtraCare card, says its reinvented app makes it easier for customers to use reward benefits, coupons and its pharmacy.

As consumers do more with their smartphones, Brian Tilzer, CVS Health’s SVP and chief digital officer, tells Marketing Daily, it made sense to re-evaluate CVS’ digital approach. “It was important to make the mobile experience more convenient to empower our customers to easily find what they are looking for, and to take advantage of all our digital health offerings when, where and how they want.”

The new app was designed so that customers can tap their coupons, rewards and prescription refills “with a few swipes of a finger.” Customers can now refill prescriptions quickly by scanning the barcode. A Drug Interaction Checker allows parents to scan over-the-counter drugs and get warnings about possible negative side effects.

And to capitalize on how shoppers use the app outside of the store, “users can open up the myWeekly Ad feature with just a tap while waiting at the doctor’s office or at soccer practice,” he says. “They can create a virtual shopping list, and send available rewards and coupons to apply to those purchases straight to their ExtraCare card.” Last year, he says more than 71.9 million ExtraCare offers and rewards were sent digitally to members’ rewards cards, “so we know this is something our customers are responding to.”

Recently, rival Walgreens made a splash by announcing a program with MDLIVE and its app, allowing customers to connect with doctors 24/7. And while Tilzer says there are no plans to follow Walgreens into that arena of tele-health right now, “we certainly wouldn’t rule out doing something interesting in that arena down the line.” But for now, “we’re more focused on what our customers’ pain points and challenges are in managing their families’ health, and what we can do to make a real impact to help them.”

Separately, the Woonsocket, R.I.-based company reported that its fourth-quarter revenues climbed 13% to $37.1 billion, despite its decision to bail out of the tobacco sales, driven primarily by gains in its pharmacy business. Same store sales rose 1.6% from the prior year, with pharmacy sales up 5.5% and front store same store sales down 7.2%, driven by the loss of tobacco sales, as well as smaller basket sizes.

"Our results underscore the fact that we are winning in the marketplace and, as a result, driving solid and sustainable growth,” says Larry Merlo, president and CEO, in tis announcement, adding that “2014 will be remembered as the year in which we rebranded our company as CVS Health and made the right decision to exit the tobacco category, better aligning our company with patients, payors, and providers.”