New 'Odd Couple' Vs. The Old One: Should We Go There Or Not? 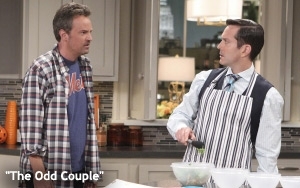 If you’re asking yourself why CBS is remaking a series as well-remembered as "The Odd Couple," then here’s an answer.

The old one is really old, and it’s not likely that it is as “well-remembered” today by vast numbers of younger viewers as older ones, despite its long afterlife in rerun syndication (which continues to this day, by the way).

Call it the TV Generation Gap. People of a certain age retain vivid memories of the TV shows of the ’60s and ’70s because these shows represent cherished memories from their childhoods -- and perhaps more importantly, these old shows were watched by tens of millions of people in that bygone era when the big broadcast networks had virtually no competition except each other.

To make a sweeping generalization that “everyone” watched “The Odd Couple” when it first aired might not be accurate in fact, but it does seem that way when the audiences for typical TV hits of the 1970s are compared to the much-smaller audiences that a “hit” TV show draws today.

As a result, the old shows loom very large in the minds of many. The old “Odd Couple” ran for five seasons on ABC, ending its network run on March 7, 1975 -- 40 years ago next month. Its best feature, and the probable reason for its success then and now, was the pairing of two veteran actors in the starring roles -- Jack Klugman as the slob Oscar Madison and Tony Randall as the fastidious Felix Unger. They were just about perfect in it.

The new “Odd Couple” premiering this week stars Matthew Perry, 45, as Oscar and Thomas Lennon, 44, as Felix. Of the two, Perry is the better-known actor, due mainly to his role in “Friends.” Lennon is perhaps best known as the star of “Reno 911” on Comedy Central.

In the new series, the two are thrown together for the same reason as the old: Felix has been thrown out of his house by his wife, and he turns up at the doorstep of Oscar’s New York apartment seeking solace and a place to sleep.

Felix is still a photographer and Oscar is still involved in sports journalism (sort of). In this remake, he’s not a newspaper columnist but a sports-radio personality who broadcasts his call-in show from his living room, which is strewn with old clothes and stale sandwiches.

In fact, care seems to have been taken to not stray too far from the familiar surroundings and set-up of the old show. Except for the ubiquity of cell phones, this new one is very similar to the old one. Felix still honks noisily due to sinus problems, wears an apron while cooking and constantly straightens up after Oscar. And Oscar’s still a hedonistic slob.

They have even retained the old familiar theme music, but updated it with an animated title sequence that looks like it was made by the creators of the “Mad Men” titles.

CBS made only the pilot episode available for preview, so it’s not possible for a TV columnist to determine if Perry and Lennon grow more comfortable in their roles as the show goes on, although their energy levels seemed to rise and their chemistry seemed to improve over the course of this single episode.

It’s those two elements -- energy and chemistry -- that Jack Klugman and Tony Randall had in spades. Whether or not Perry or Lennon ever rise to their level remains to be seen, but it’s also true that this might not be important to vast numbers of potential viewers who don’t feel strongly about the old “Odd Couple.”

Why make a new “Odd Couple”? Here’s another answer to that question: This scenario -- originating, of course, with the old Neil Simon play about two mismatched friends who live together -- is great comedy material. It’s been a movie, a well-remembered TV show, a less-remembered TV show with two African-American leads, and the basis for countless stage productions, including versions with female leads. It’s flexible enough for any era and any pair of oddly matched people too.

The key to its success lies mainly in the casting. If Perry and Lennon can take their game up a notch or two in subsequent episodes, then this new “Odd Couple” stands a chance of sticking around.

Will they ever be as fondly remembered as Klugman and Randall? Maybe not, but a better question might be whether that really matters at this point.

broadcast networks, tv
3 comments about "New 'Odd Couple' Vs. The Old One: Should We Go There Or Not?".
Check to receive email when comments are posted.
Read more comments >
Next story loading