Red Robin Invites The Pope To Come For A Bite ... Six Months Too Early 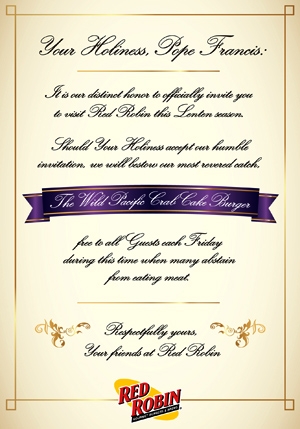 Red Robin Gourmet Burgers has announced that it has "extended an invitation" to Pope Francis to eat at Red Robin during the Lenten season.

The schtick: If the pope accepts and visits any U.S. Red Robin location between Feb. 18 and April 2, the chain will offer consumers its new, limited-time, "Lent friendly" crab cake burger free on the remaining Fridays during Lent.

In addition to blasting out a press release with the offer, the casual restaurant brand actually tweeted it at @Pontifex.

"We're hoping that our invitation catches the pope's attention," SVP, CMO Denny Marie Post is quoted as stating in the release. "Of course, even if he doesn't make a visit, we know The Wild Pacific Crab Cake Burger will satisfy our guests' appetites."

Of course, as Red Robin and the rest of the world well know, the Vatican confirmed in November that the pontiff will visit the U.S., but not until September of this year.

Still, someone is making sure there aren't any loopholes here. Just in case the pope decides to change his schedule for 2015 in order to visit a burger joint halfway around the world, the invitation doesn't obligate the chain to actually give him a free meal.

And if he visited and the free crab cakes deal kicked in, it would only be good, according to Red Robin, "while supplies last." (Although this for some reason brings to mind a Biblical account of multiplying loaves and fishes.)

In a follow-up, Marie Post told Marketing Daily: "As everyone knows, the only thing you can expect from Pope Francis is for him to do something unexpected. While we don’t know the day-to-day specifics of his travel schedule, we would certainly welcome him any time, including during his scheduled trip in September. There are more than 75 million practicing Catholics in the U.S., so this is a great way to bring attention to our first-ever Lenten LTO [limited time offer]. After all, if he accepts our invitation, everyone wins."

Oh, well. It's bound to generate some social action and publicity.