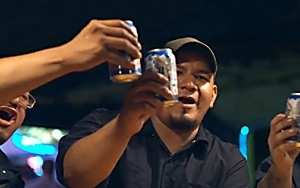 Anheuser-Busch has selected its 2015 class of Busch Heroes -- local role models that will be vaulted to national hero status, courtesy of the beer brand.

From a special education and construction worker from Ohio to a female cattle farmer from Florida, those selected come from a variety of geographic and socioeconomic demographics.

In 2014, Busch selected the inaugural class of eight heroes. The company will feature those individuals in addition to the six new heroes in national print ads, retail displays and region-specific billboards.

After hearing firsthand about some of the successes the 2014 Heroes have had and how their lives have changed as a result of being named a Busch Hero, bringing back the program in 2015 made perfect sense, says Carolyn Zwiener, brand manager, value brands, Anheuser-Busch.

“This program has been a success because the people featured in this campaign epitomize the brand as a whole: they are everyday people -- not paid actors or models,” Zwiener tells Marketing Daily. “Fans of Busch and Busch Light can hopefully see a bit of themselves reflected in the real-life stories of our Busch Heroes.”

Three of the 2015 heroes, Dallas Puskar, Dewey Hemilright, and Morgan Cook, are featured in mini-documentaries. Puskar is a special education teacher and construction worker from Cleveland, Ohio; Hemilright is a commercial fisherman from Wanchese, N.C. and Cook is a cattle farmer from Floral City, Fla. The videos can be viewed on the Busch Facebook page and YouTube channel.

The program was developed to recognize people who go above and beyond -- not only in their day job, but also by making a difference in their community when the workday is complete. Heroes are identified and nominated by friends, families, neighbors and coworkers.

The program targets current, loyal Busch drinkers who relate with the “everyman” featured in the hero advertisements, Zwiener says.

“We’re also looking to increase awareness and trial among 21- to-34-year-olds, and we are excited to engage with this audience through the heroes program by asking consumers to nominate the next class of Busch Heroes via the Busch Web site and social platforms,” she says.

The nomination for the 2016 Busch Heroes is already underway. Consumers can nominate someone who they believe deserves to be recognized as a Busch Hero on the Busch website.