Chevrolet Stays On Top Of Racing With New Daytona 500 Ads 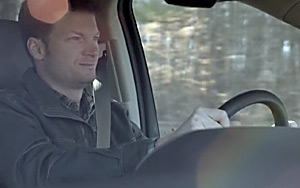 It's time for the jewel in the crown of American stock car racing, the Daytona 500. Racing's biggest sponsor among automakers, Chevrolet, is reaching for Angus and Malcolm's greatest hit, “Back in Black” as soundtrack for new advertising to break during race coverage of Sunday's great race.

The ad is all about Chevrolet’s historical pole position in NASCAR. The 60-second ad calls out Chevy's 738 NASCAR wins leading up to this year's four checkered flags; 38 NASCAR manufacturer titles; 29 driver championships; 23 Daytona 500 wins, including the past two years.

A second spot (see video below), for the Silverado pickup, features defending Daytona 500 champ Dale Earnhardt Jr. Earnhardt as he drives the back roads of North Carolina in a new Silverado as he speaks, in a voiceover, about how his father and grandfather raced and how they also always drove Chevrolets. He also talks about how he likes the small-block V8 engine that powers both the cars he drove on the track and on the road.

The automaker is represented at the Daytona 500 by Jeff Gordon and Jimmie Johnson with Hendrick Motorsports and Kevin Harvick. The new advertising spots will run throughout the 2015 NASCAR Sprint Cup season.

General Motors Co. is the most active sponsor of motorsports, with 12% of properties reporting a partnership with the company. Ford Motor Co. follows in second at 10% with Toyota Motor Corp. and The Coca-Cola Co. tied for third at 7%. Then it's tire maker Pirelli,  Honda, Sprint; Berkshire Hathaway, Jansen, Royal Dutch Shell, Volkswagen and Renault.

Not surprising, GM's main division, Chevrolet, is the leading auto brand overall in motorsports, with 10% of race properties reporting the GM division as a sponsor. Ford and Toyota tie for second with Pirelli in third.

Technology (4.2), non-alcoholic beverages and sports apparel (3.0) round out the top five most active categories.