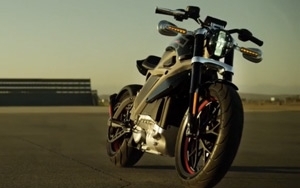 Can Harley-Davidson make an electric motorcycle? Yes. Will loyalists buy into it, much less buy it? Tough question. But it’s one the company has been trying to get a hook on since last year with its Project LiveWire road show.

After taking the bikes on a trans-U.S. tour along Route 66 last year, the company is bringing the grassroots program to Asia, Europe and Canada this year. The point is to get customers to swing a leg over the Project LifeWire electric-powertrain motorcycle, take a ride, and opine about it.

The Milwaukee-based company isn’t looking to drive consumer demand, since the bike is still something of a lab project, but to get consumer input, which will have some impact into whether the company even opts to build the bike. That would include learning whether diehard Harley owners would tolerate a motorcycle bearing the Harley nameplate that doesn't have a big V-twin under the seat.

The motorcycle manufacturer, which has seen most of its volume in the U.S. and Europe, has been growing in Asia, although China is still pretty much shut because of regulations and a lack of consumer bike culture. The tour actually starts at Malaysia's Sepang International Circuit this week.

One of the clear issues with a Harley electric is sound and feel, essential elements of the cruiser experience. An electric motorcycle would obviously lose the rumble and tremor of an internal combustion engine. But the motorcycle isn't silent; it doesn’t have the guttural roar, but it winds up with a sound mildly reminiscent of a jet engine. The company is counting on that for a more futuristic take on audio machismo. To that end people who don't want to wait to ride the actual bike, or maybe don’t have a license, can straddle a stationary Project LiveWire hooked to a dynamo, and rev it up to get the sound and feel.

The company says that through the course of last year's 30-stop tour, over 15,000 customers offered their opinions, with over 6,800 of them doing so after having taken demo rides. The U.S. tour included a stop in Miami explicitly for Hispanic customers.

The European leg of this year's tour includes a pre-tour promotion offering people who sign up early first dibs at riding the Project LiveWire bike at one of the five locations in the United Kingdom, France, Germany, Italy and the Netherlands from May to August.

The North American tour expands to Canada, with 13 stops at U.S. and Canada Harley-Davidson dealerships and consumer events starting in April, per the company.