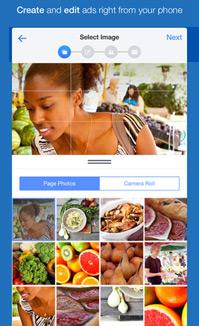 Facebook is hoping to make buying and designing ads on its platform as easy as possible, especially as the company targets small and medium businesses whose execs are not sitting behind bigger screens all day. To that end the social network released a mobile app version of its Facebook Ads Manager, which already lives on the desktop. For now it is available only on iOS, with an Android version promised later in the year.

Aside from providing great design and interactive flexibility in the context of an app, the format allows for better notifications. You can get more timely alerts about when ads are about to stop running or when you are approaching a budget limit.

The app is designed to help ad creation as well. You can pull in media to build the ad and more easily save it for finishing later. And of course you can edit the ads and targeting you have running and monitor performance.

There is a sizable audience for Facebook’s tools, which the company has been trying to refine of late. The SMB regional direct for Facebook in EMEA told CampaignLive that the mobile Web version of Ads Manager had grown to a monthly user base of 750,000. Over 2 million businesses are using Facebook for advertising, the company claims, with the majority in the small to medium class.

As Facebook starts reaching saturation in many markets, it need to find ways to squeeze more revenue per user. Improving tools to broaden the base of advertisers is as key to its growth potential as it was for Google years ago.