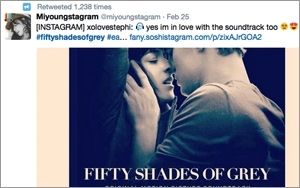 Word-of-mouth marketing has been a big help to movies for decades. Now, with social media, many are looking to affix specific value to that personal touch.

A new study says just one tweet has the value of adding $560 to the opening weekend box office revenues for a particular movie between one and five weeks prior to release, according to Networked Insights.

Specific tweets that show the intent of actually seeing a movie or encouraging others to see a movie are even more valuable. For example, here is a tweet for the new movie “Fifty Shades of Grey”: “Anyone wanna go see "Fifty Shades of Grey" Saturday then re-enact some of the scenes after?”

Networked Insights says this type of tweet is worth $4,420 four weeks before the movie releases, and $1,100 the week before release -- over six times more valuable than all tweets combined.

To get these results, Networked Insights looked at over 400 movies dating back to 2012. Over 30 million people tweet about movies every month on Twitter.

Its research used 10 different mathematical models across eight different genres, franchises and sequels to measure the impact of tweets. Digging deeper, research also accounted for specific movie characteristics such as movie genre, competitors in the weekend and theater count.

The media research company says it considered that each tweet also “represents many silent consumers who do not tweet about the movie.”