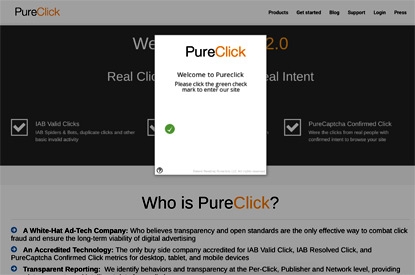 PureClick has received click measurement accreditation from the Media Rating Council (MRC) for its click forensic metrics related to its PureCaptcha and PureBounce products. The accreditation verifies that the clicks do not come from bots. The idea is to add a level of transparency that does not exist in paid-search advertising. The platform identifies high-bot traffic publishers by providing a technology that only humans can navigate through.

While company executives are not ready to take on the role of sheriff, they do believe the technology can provide a great deal of transparency. The accreditation applies to Interactive Advertising Bureau (IAB) Valid Clicks, IAB Valid Clicks Resolved, and PureCaptcha certifies the company's core methods, metrics, and reports comply with industry-accepted guidelines for click measurement, as well as with MRC's Minimum Standards for Media Rating Research.

Tim Rodgers, cofounder at PureClick, which provides a platform to identify what happens after the click, said through the PureCaptcha platform brands have the ability to identify the publishers that have a high concentration of bot-click traffic on their network.

Rodgers has been putting together a list of publishers with high bot rate that it plans to provide to brands interested in learning more about the company's products and publisher networks.

In a perfect world, PureClick wouldn't exist, Rodgers agrees. "But it's far from perfect, in terms of what we've seen," he said. "We exist because there's a huge problem."

PureClick provides technology where only humans can navigate through paid-search ads by using a snippet of code, per Rodgers. PureCaptcha, the confirmed click, stops bots from doing what they were programmed to do and verifies the action. The technology verifies that only humans with intent can click through the PureCaptcha. It also analyzes the health of the network by tracking behavior, looking at intent as one proxy, and identifies "bad" publishers that are allowing bots to traverse their network.

"Especially in mobile, you cannot measure intent of a user until you look at what happens after the transaction occurs," Rodgers said. "There's a huge difference between someone coming to the site for a second or someone who stays for 20 seconds and them closes the browser."

The PureBounce product measures commercial interaction or time-to-bounce from clicks on paid-search and display ads. It verifies whether the site was available and if the click stayed onsite a minimum of two seconds.

PureClick's PureDisplay and PureSearch products are not accredited by the MRC, but provide supporting tools for examining ad placement context in both display advertising and paid search. Rodgers said contextual relevance is an important part of the Ad Verification Guidelines, and transparency into the context of these placements is critical for advertisers to make informed media buying decisions.