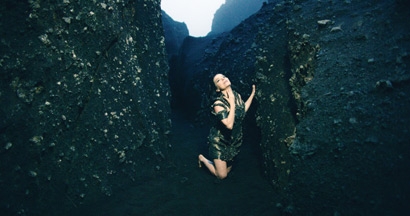 Part of the automaker's multi-year relationship with the Museum of Modern Art (MoMA), the exhibition -- Björk, which runs from March 8 to June 7 -- involves a collaboration between Björk and Klaus Biesenbach, chief curator at large at MoMA and director of MoMA PS1, and Volkswagen of America's Electronics Research Laboratory.

The installation includes music, video, graphic, objects, costumes and instruments documenting her two-decade-long career. In addition to her many hits, she also had roles in Lars von Trier’s heart-wrenching films “Breaking the Waves” and “Dancer in the Dark.”

Volkswagen developed a critical part of the experience: an augmented audio guide developed by the VW lab with the artists, as well as with German sound agencies Klangerfinder and S12.

The guide, which can be customized by each visitor, is based on VW's “Sound Journey” platform -- which, per the automaker, creates a personalized soundtrack based on inputs like how fast a person drives, accelerates and decelerates, and adjusts the steering wheel. Volkswagen says the audio guide for the Björk retrospective is a "3D listening experience" that has a location-based trigger function via Bluetooth, where the experience is customized to a user based on their movements.

Volkswagen spokesperson Carsten Krebs explains that she reached out to the automaker to help create an immersive audio experience. "Her main focus was that she didn’t want to just have art 'hanging on the wall,' but music, art, fashion and life. And a component of that was finding a way to bring music to life." He points out that the exhibition includes a 10-minute video, a teaser for which is on YouTube, where it serves as a promotional piece for the exhibition.

Krebs tells Marketing Daily that, in a car, "Sound Journey" is linked to the engine, so you literally create your own music based on how you drive. Might one imagine (speaking of Kraftwerk) something along the likes of their “Autobahn” composition?

"She asked if [VW] could help her accomplish that goal," he says, explaining that visitors get a headset and an iPhone type setup and the music changes based on your pace through the exhibit, rather than a track that keeps its own immutable pace. “It depends on how fast you are, or quick you are, or if you change directions, or turn your head."

Per a release on the exhibition, the music and narrative content was composed and created by Björk and the Icelandic author Sjón, and directed and narrated by the Icelandic actress and storyteller Margrét Vilhjámsdóttir.

The company, via its ongoing relationship with MoMA launched in 2011, has brought artists to the museum whose oeuvres orbit the twin stars of pop culture and art. In 2012, the museum, with Volkswagen's support, hosted an exhibition of 70s German electronic band Kraftwerk. Volkswagen, which tends to favor interdisciplinary artists, has also sponsored exhibits by Belgian Francis Alÿs.

The company has a semi-permanent geodesic dome in Queens at sibling museum PS1 as well, and ran a program called EXPO1: New York, that involved a similar installation at Rockaway Beach after Hurricane Sandy.

Volkswagen has, so far, done about 20 projects with the museums, including international online education courses, and urban design experiments. VW also has relationships with Nationalgalerie – Staatliche Museen zu Berlin.