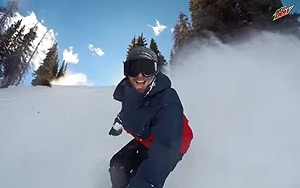 Yes, snow actually can be fun (sometimes). Those needing a reminder can experience the rush of snowboarding down a pristine backcountry slope in Utah — without taking time off or springing for airfare — courtesy of Mountain Dew.

The brand that urges fans to "Do the Dew" has released a virtual reality experience, created with digital agency Firstborn, that takes viewers along as Olympic snowboarders Danny Davis, Scotty Lago and Jack Mitrani are helicoptered up a mountain and speed down the powdery slopes. (To capture the footage, Mitrani had to hold camera equipment while boarding.)

The interactive experience debuted during this week's Burton U.S. Open Snowboarding Championships in Vail, Colo. and will also be shown at South by Southwest in Austin, Texas. At the events, participants wear Oculus Rift VR head-mounted displays.

But armchair thrillseekers have another option: Those with a Samsung Gear VR headset (price: about $199) can view the "Dew VR Snow Experience" by downloading it free from the Samsung Milk VR marketplace. Thanks to "Time Warp," a first-of-a-kind feature developed by Firstborn, viewers can even jump back to view action sequences again, just by pushing a button.

"Mountain Dew fans tend to love skateboarding, snowboarding and action sports in general," and the brand, which considers itself a "digital instigator," is always looking for new ways to "bring them closer to experiences that they love," digital brand manager Christine Ngo told The Drum.