'Fashion Police': Much Ado About Almost Nothing 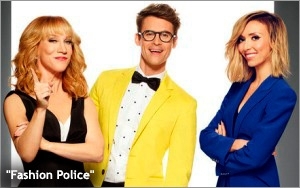 I don’t know what’s more puzzling: Kathy Griffin -- one of the most vicious insult comics working today -- quitting “Fashion Police” because it’s too mean; or all the attention being paid to this TV show and its travails when, in actual fact, the show’s audience is relatively miniscule.

The news came down yesterday (Thursday, March 12): Griffin has left the show after reportedly campaigning for the job as co-host and moderator ever since the death last September of Joan Rivers (if not before her death, as was also reported).

Griffin lasted through seven shows. The highest-rated was probably the post-Oscars show seen on E! on Monday, Feb. 23. That show drew 959,000 total viewers, higher than normal for the show’s current incarnation this year with newcomers Griffin and Brad Goreski, and well below the norm for when Rivers hosted the show, my sources tell me.

Yesterday, Griffin issued a statement in which she honored herself and her position in the pantheon of insult comedy, while at the same time implying that the style of insults leveled by the commentators on “Fashion Police” was somehow too inappropriate for her to continue.

“I am a freedom-loving female and gay rights activist who loves to find the funny in all people, attitudes, beliefs and appearances, but only when the context permits intelligent humor,” the statement said. “I thought that I could bring my brand of humor to ‘Fashion Police’ so that beautiful people in beautiful dresses could be teased when appropriate. My brand of humor, while unrepentant and unafraid, is all about CONTEXT [caps hers]. There is plenty to make fun of in pop culture without bringing people’s bodies into it …

“Listen, I’m no saint,” she wrote magnanimously. “I’m a feminist AND a Gurrrrl [sic] who loves an offensive joke or a well-timed barb and you will find plenty in my repertoire. But I do not want to use my comedy to contribute to a culture of unattainable perfectionism and intolerance towards difference,” she droned on. “I want to help women, gay kids, people of color and anyone who feels underrepresented to have a voice and [yada yada yada] … it’s time to move on.”

As Griffin herself might say (and did say years ago on “Seinfeld”): “Snoozers!” These passages are only part of a statement that is much too long to reproduce in its entirety here. Suffice it to say, the length of this statement makes you wonder if the self-righteous comedienne doth protest too much.

Long as it is, nowhere does the statement make any reference to any specific examples of statements on “Fashion Police” -- body-bashing or otherwise -- that ran afoul of Kathy Griffin’s personal and apparently very high standards (which until now did not seem to exist).

In actual fact, “Fashion Police” seems to be imploding over one statement Giuliana Rancic made a few weeks ago about the dreadlocks being worn on a red carpet by an 18 year-old entertainer named Zendaya. Giuliana didn’t think the dreadlocks were an appropriate hairstyle for this young woman and in saying so, Giuliana said something about Zendaya smelling of Patchouli oil and “weed.”

This was interpreted by some as an impossibly intolerant statement condemning, by implication, Rastafarianism (I think). In the fallout that came afterwards, “Fashion Police” stalwart Kelly Osbourne quit the show.

E! issued a statement too yesterday about Griffin. “We can confirm that Kathy Griffin is leaving ‘Fashion Police’,” the statement said. “We wish her all the best and are grateful for her time on the show, as well as the many laughs that she gave us all.”

That last bit strikes me as sarcastic. I have a feeling she gave the people at E! no laughs at all, just agita.

In the final part of this brief statement, E! insisted the show will go on: “ ‘Fashion Police’ will return, as scheduled, on Monday, March 30, at 9 p.m. [Eastern] with our talented co-hosts Giuliana Rancic and Brad Goreski and Executive Producer Melissa Rivers. No further information is available at this time.”

Although E! wants to clamp the lid down on “further information,” I’d like some more information anyway -- most notably, who’s going to be on the show, just these two? How’s that gonna work?

Here’s what probably really happened: The tragic death of Joan Rivers likely doomed the show because she was the one person who could get away with the kinds of savage insults aimed at A-listers that had people tuning in every week. By contrast, anyone watching Griffin these last few months could come to the conclusion in a matter of minutes that it wasn’t working. She was never comfortable, she knew it, and she quit.

End of story -- and in all likelihood, end of show too.