Then we hung with some A-listers at a private dinner party hosted by long-time MediaPost contributor and on-again/off-again Spin columnist Joe Marchese, who recently sold True [X] to Fox. We also got to meet Heather Hartnett, CEO of Marchese’s new ventures studio Human Ventures and its investment arm, Human Ventures Capital.

Hartnett said the focus of the startups it will nurture will be on so-called “impact” companies that are measured as much by their contribution to society as they are by profits. She said those metrics can sometimes be difficult to nail down, but that they are negotiated as terms just like traditional capital and equity when structuring an investment.

We also spent some time chatting with the Visa marketing and digital marketing team, including Head of North America Marketing Lara Hood Balazs, Chief Digital Officer Chris Curtin and Senior Vice President-Global Head of Digital and Marketing Transformation Shiv Singh. Singh, who was one of the architects of the seminal Pepsi 10 corporate marketing venture funding project when he was at Pepsi, briefed us a little on Visa’s latest iteration of that kind of practice, a program unveiled Saturday at SXSW Interactive called “The Everywhere Initiative.”

Unlike previous “cast a wide net” startup competitions, Singh said Everywhere begins by briefing startups on very specific Visa marketing goals they can develop against and compete for. In other words, he said Visa would brief startup contenders the way it would task an agency to develop a marketing campaign, including a brief “outlining Visa’s vision and detailing specific challenges from our marketing and communications teams.”

Visa will begin accepting submissions from startups on March 14 and Singh said contenders will be provided explicit background necessary for them to develop their proposals.

“We’re treating it like a true marketing partnership,” he said, acknowledging that requires a level of “trust” that likely has not been leveraged in previous startup competitions implemented by corporate marketers. 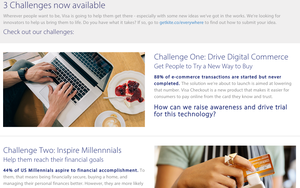