AUSTIN, TEXAS -- Turning a modern precept of industrial design on its ear, designer and technologist John Maeda late Sunday told a roomful of SXSW Interactive festival attendees here that design, not engineering, has begun to take the lead in digital media innovation and market valuation. In truth, Maeda said designers are beginning to get an equal seat at the table, but based on an analysis of venture funding, the biggest recent plays -- companies ranging from Instagram to Pinterest to Airbnb to Vice Media -- have been conceived and led by designers, not engineers.

In fact, an analysis of his firm’s (Silicon Valley VC Kleiner, Perkins, Caufield & Byers) data shows that 20% of all venture funding activity since 2013 has gone to design-led startups. The data, which was released in a report unveiled here Sunday, is accessible on the firm’s site, and makes a strong case that we’ve shifted from an era of making things work “faster” to making them work “better,” Maeda said to an enthusiastic SXSW crowd.

Another indicator, Maeda said, was that when he joined KPC&B as its first deisgn partenr in January 2014, none of the big VCs along famed Sand Hill Road in Silicon Valley had a designer on their team. Since then, he said, a half dozen have brought design specialists onto their teams, not to “design their logo,” but to design parts of their portfolio investment strategies.

In the past four years, he said, five of the biggest venture funding deals were founded by designers and have collectively raised $2.75 billion from the VC community.

Maeda said the shift is having an effect on the entire technology innovation sector, not just at design-led startups, but at technology-driven ones where design is moving from the back-end of the process -- what Maeda described as putting “lipstick on a pig” at the end of development -- to the front-end as part of the engineering.

He also cited an analysis done with Jackie Xu -- who oversees talent at KPC&B and who joined him on stage for part of his presentation -- showing that many modern day designers are really multidisciplinary and steeped in both technology and business. In other words, they indicated that the cultures of design, business and technology are finally being fused.

Maeda said this is not a first in the evolution of industrial design, citing examples such as furniture designer Henry Thonet’s “Vienna coffee house chair,” which revolutionized that industry in the 1800s, or even Detroit’s embrace of industrial designers in the 1950s.

Based on his and Xu’s analysis, KPC&B estimates the current ration of designers to engineers in technology startups is somewhere between a 1-to-4 and a 1-to-5 ratio. When he showed that data to a design colleague, he said his peer replied, “Why isn’t it one-to-one?”

Perhaps the most insightful data point shown by Maeda explaining the increased need for better interface and user experience design in media technology was a slide illustrating the rise in the number of potential “ouches” users might experience with their interface throughout their media day.

The chart (shown here) shows the number of “check-ins” from the early days of email when users would check their email an average of once in the morning and once at night, to the current user behavior of “150 unlocks” of a mobile phone every 5.6 minutes.

Each of those unlocks, Maeda said, represents a potential new “pain point” for a user -- and the technology startups trying to engage them. 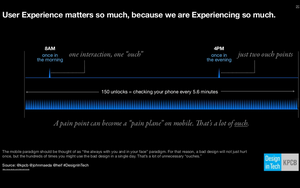