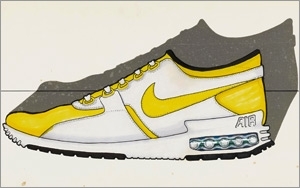 The Beaverton, Ore.-based company says revenues for Nike Inc. climbed 7% for the period to $7.5 billion, a 13% jump on a currency-neutral basis. At the Nike brand itself, revenues climbed 11% to $6.9 billion. And at Converse, sales soared 33% to $538 million. Net income grew by 16%, reaching $791 million. Total spending on demand creation was flat at $731 million, with ad expenses declining a bit due to the timing of product launches.

Future orders for Nike brand athletic shoes and apparel are just 2% higher worldwide. Excluding currency fluctuations, those orders are 11% higher than in the same period a year ago.

“Our strong third-quarter results show that our growth strategies are working, even under challenging macroeconomic conditions,” says CEO Mark Parker in its announcement.

“While Nike is conscious of near-term financial targets, it is very much focused on healthy long-term growth,” writes analyst Sam Poser, who covers the stock for Sterne Agee. “Nike will likely continue to gain share worldwide due to ongoing product innovation and the massive dollars dedicated to R&D, marketing, and infrastructure.”

In North America, sales gained 6% in the quarter, with basketball and sportswear products selling especially well. (In its retail stores, same-store sales advanced 7%.) Core running footwear, which Poser believes is largely the Nike Free, is not performing well.

Deutsche Bank says that while foreign exchange rates and slower running sales may be weighing on the company, “Nike is dominating globally, which in our view remains the market's focus. Also, China continues strong, as it becomes a more important part of the story.”

Separately, as part of the introduction of Air Max Zero, the company has released archival background on the Air Max design pedigree, billing the shoe as “the One before the 1.” Elements of new shoe, based on designer Tinker Hatfield’s first vision of visible Air cushioning back in 1985, have been “tucked away from everyone’s eyes for nearly three decades,” the company says, and that new shoe “blends heritage with technological advances for its modern day arrival.” See the videos here and here.