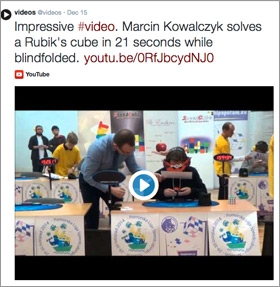 “We’re running a small test on a few variations on the video playback experience,” according to the micro-blogging giant.

For the time being, select Twitter users will see complete videos play in a loop, while others can expect to receive a looped six-second teaser. In each test case, the videos will be muted until users choose to tap on them, at which point the video screen will also expand.

The move -- first reported by Ad Age on Monday -- is part of a broader video push by Twitter.

The social network just acquired live-streaming app Periscope -- a deal that reportedly set the company back between $50 million to $100 million.

Earlier this month, Twitter also rolled out an embedded video widget for publishers. With the widget, publishers can highlight Twitter-hosted video on their sites. The new feature relies on the same JavaScript used to render Tweet buttons and embedded Tweets.

In addition to matching content creators with brands, Niche offers free cross-platform analytics. Financial terms of the deal were not disclosed, but reports put it at around $30 million.