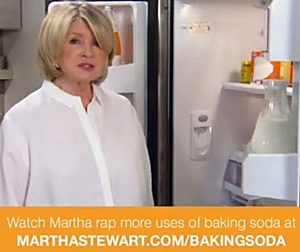 Then again, Stewart's nickname during her incarceration for insider trading was "M. Diddy," and she's certainly demonstrated a sense of humor about her public persona in recent years. So maybe it's not so whack that her latest endorsement deal has her rapping — albeit in a style that's more school-teacherish (and tongue-in-cheek) than gansta — about the versatility of baking soda.

The year-long partnership between Arm & Hammer parent Church & Dwight Co. and Martha Stewart Living and Martha Stewart Digital is being launched with a series of videos, including one in which Stewart gamely raps out her favorite non-edible household tips for using the brand's baking soda.

There are also "how-to" videos with Stewart voiceovers that demonstrate how to use the product to clean a vase and to eliminate odors from pet bedding, and others that highlight every-day uses for the product in various rooms in the house.

The videos are being released, through May, on Arm & Hammer's Facebook and YouTube channels and on Martha Stewart Digital owned and syndicated partner channels, including MarthaStewart.com/bakingsoda and social media.