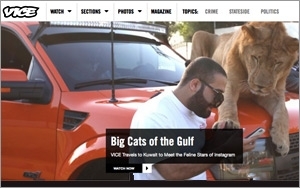 Hipster news juggernaut Vice Media, having already taken online news video by storm, is coming to TV courtesy of HBO. The premium cable channel will begin carrying a daily, half-hour newscast produced by Vice Media, which will appear five days a week, 48 weeks a year. The start date for the new daily newscast was not disclosed.

Vice will also receive its own marquee spot on HBO Now.

The daily newscast -- a first for HBO -- extends its previous partnership with Vice, which has been producing a newsmagazine for HBO since 2013. HBO is also committing to more episodes of the newsmagazine, raising the total from 14 to 35 episodes per year. As part of the expanded partnership, the newsmagazine will run through 2018.

Separately, Vice is also said to be in talks with Facebook about producing original short-form videos, which could be distributed along with advertising via users’ Newsfeeds.

Last September, the media company received a new $500 million round of investment from Technology Crossover Ventures and A&E Networks. The investments valued Vice Media at $2.5 billion.