Charter Communications Snaps Up Bright House Networks For $10B 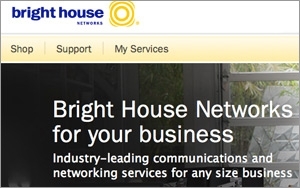 All this is happening as Comcast, the biggest U.S. cable operator, is near completion of its $67 billion merger with Time Warner Cable, the second-largest cable operator.

Charter has some 4.2 million cable subscribers. Bright House has around 2.5 million, with subscribers in Florida, Alabama, Indiana, Michigan and California. The proposed deal would mean the combined Charter-Bright House company would become the second-largest U.S. cable operator.

The structure of the deal will have Charter own 73.7% of a new company and Advance/Newhouse, the parent company of Bright House, owning 26.3%.

Charter, of which Liberty Media owns 27.3%, has been in merger talks with Time Warner Cable. John Malone, chairman of Liberty Media, has said the cable industry needs mergers to become stronger in order to combat new digital media businesses.

Increasingly, cable operators have had concerns over consumers cutting or “shaving” down their cable programming packages as well as consumers looking to buy more TV programming services delivered over the Internet.