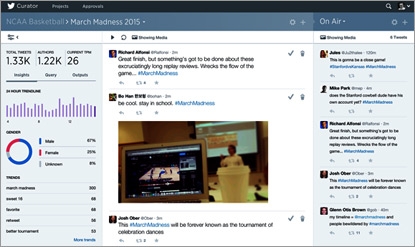 Twitter on Tuesday officially launched Curator -- a real-time dashboard for publishers to monitor and manage tweets (and Vine videos) across media channels. The launch of Curator is part of an ongoing effort by the company to prove its worth to media and marketing leaders.

Curator was designed to help publishers of all stripes discover relevant conversations and trending topics based on geographic region, user demographics, and other filters.

As its name implies, the service’s filters are intended to help publishers curate content, which can then be packaged for the Web, TV and any other connected screen. TV broadcasters, for example, can use Curator to create on-air graphics featuring tweets that are relevant to a current segment.

Twitter unveiled Curator at its News:Rewired Conference, in February. Long before then, however, Web watchers were begging the social giant to come up with a better way to make sense of the Twittersphere.

In the absence of a certified management solution from Twitter, publishers and marketers have come up with various ways to curate tweets.

Since its launch in 2010, for instance, Storify has established itself as the curation tool of choice among countless journalists, agencies and brands, from BBC, CNN, and The Wall Street Journal to Ford, GE, and HBO.

How the launch of Curator will impact the fortunes of Storify -- which was acquired by social media software provider Livefyre in 2013 -- and similar services remains to be seen.

Just a few weeks ago, for instance, the microblogging giant rolled out an embedded video widget for publishers. With the widget, publishers can highlight Twitter-hosted video on their sites. The new feature relies on the same JavaScript used to render Tweet buttons and embedded Tweets.

Twitter also recently bought Niche -- a start-up that teams up brands with social media influencers, and Vine influencers in particular. Niche also offers free cross-platform analytics. Financial terms of the deal were not disclosed, but reports put it at around $30 million.

As a result of these efforts, analysts have been bullish about Twitter’s ability to help publishers reach target audiences. This year, “Twitter … will likely become an increasingly important form of engagement for brands given the ability to communicate with consumers in real-time,” predicted a recent report from the equity research team at J.P. Morgan.