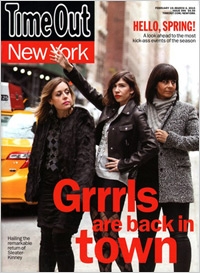 Time Out New Yorkis going against the general trend in consumer magazines with a big bet on print advertising. The well-known city guide and directory announced that it will shift to free distribution, as it also more than doubles its circulation to 305,000 copies with a weekly publication schedule.

The new model relies in part on an aggressive distribution strategy, including street teams who will pass out copies on Wednesdays, when TONY is published, along with free distribution via lifestyle venues, including nightlife spots, gyms and theaters.

Regular readers who want to receive the printed guide at home can still buy paid subscriptions.

This repositioning follows a similar revamp for TONY’s London counterpart in 2012. Time Out and its global counterparts were acquired by Oakley Capital in 2011. However, it is one of the few remaining print editions for Time Out in North America. Most of these editions are actually co-owned by Oakley with other investors.

As part of the new ad-focused strategy TONY is raising ad rates to reflect the growing circulation, and will also begin offering advertisers more integrated marketing options. This includes shifting the magazine’s directory listings to the Web site to create more room for ads around editorial features.

Currently, TONY’s Web site attracts around 3.5 million unique visitors a month, according to the company.

The magazine has also been relying more on celebrity appearances in recent years. Last year, it invited Susan Sarandon to be editor for a day.