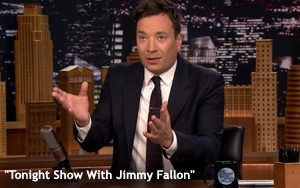 NBC continues to claim major late-night dominance and big headlines when it comes to the still high-flying “Tonight Show with Jimmy Fallon.” But another network is finding something to crow about.

Analyzing its one-and-a half late-night time period -- 11:35 p.m. to 1:05 p.m -- where it programs, ABC says it comes in first in overall viewers -- averaging a Nielsen 2.399 million viewers for the hour-long “Jimmy Kimmel Live” and a half hour of “Nightline.”

NBC is at 2.281 million viewers, followed by CBS at 2.045 million against that hour-and-a-half period.

NBC has an even bigger command of all viewers when it comes to the first hour of late night -- “The Tonight Show” -- now averaging 3.915 million during the first quarter and down a bit from its overall season average of 4.011 million.