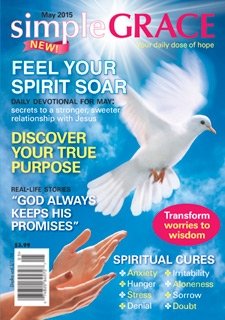 The first 144-page issue of the monthly magazine hits newsstands across the U.S. on April 10, with a launch circulation of 200,000 copies and a newsstand price of $3.99.

Conceptually, the magazine is something of a spinoff from First for Women, according to Carol Brooks, who serves as editor in chief of both titles.

“When we asked our First for Women readers what was important in their lives, they overwhelmingly told us that their relationship with God is central for them. So we decided to create an inspirational magazine that’s perfect for busy women: Simple Grace offers short devotional readings to start her day off right, as well as features that make perfect before-bed reads,” explains Brooks.

The magazine’s regular features include the Daily Devotional, with a photo that encourages reflection plus a spiritual solution for each day of the month; Inspirational Now, a media guide to help readers find inspiring movies, TV shows, books, music and apps; How I Know God is Real, with short stories of real women’s experiences with spirituality; and My Moment of Grace, with inspirational photos sent in by readers.

The first issue also includes a longer feature in which musician Amy Grant talks about caring for her parents, who were suffering from dementia associated with old age, as well as a story about Susan Mellen, an innocent woman wrongly convicted who found comfort in faith while she was imprisoned.

The magazine’s inaugural issues carries launch advertisers including Electrolux, Zondervan and Reserveage, among others.

This is just the latest in a series of new magazine launches from Bauer.

Back in 2013, the publisher launched Closer Weekly, a celebrity title targeting women ages 40 and up with a mix of celebrity and lifestyle content, distinguished from other celeb titles by a “feel-good” editorial philosophy.