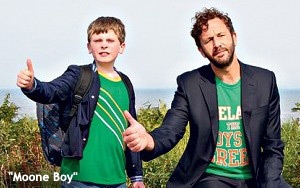 It’s no big surprise to learn that millions have not yet discovered the joys of “Moone Boy.”

It's an under-the-radar TV series if there ever was one -- originating in the U.K. and hiding in plain sight on U.S. public television. My own experience with this show stems purely from stumbling upon it by accident here in New York on our public TV station out of Long Island, WLIW/Ch. 21.

And every time I do, I try to remind myself to seek out this show whenever possible, because whenever I watch “Moone Boy,” I am transported.

Where to? Somewhere in rural Ireland, as a matter of fact, where a 12 year-old boy named Martin Moone lives with his parents and his sisters. To help him navigate the uncharted waters of his life, Martin has a grown-up imaginary friend named Sean, played by Chris O'Dowd.

And that, basically, is the show, which was created by O’Dowd, based loosely on his own childhood. “Moone Boy” premiered in 2012 and last month started its third season on Sky TV in the U.K. I have no idea how soon the episodes arrive in the U.S. after airing on Sky, nor have I ever been conscious of any particular order in the episodes that I have seen here.

I just know that I find this show to be a breath of fresh air -- due mainly to the performances by O’Dowd, young David Rawle as Martin, Deirdre O’Kane and Peter McDonald as his mother and father, Ian O’Reilly as Martin’s friend, Dessie, and the rest of the residents of tiny Boyle, Ireland.

The show contains no violence, little or no sex, and no profanity, and if you're thinking that the absence of these elements means “Moone Boy” is the dullest show on earth, then you would be wrong.

“Moone Boy” is the best TV show in years -- sitcom or drama -- about growing up.

It’s also a revelation for those of us who have long wondered why the comedies imported from England to U.S. public television are so long in the tooth. I have been known to enjoy “Are You Being Served,” “Keeping Up Appearances” and “As Time Goes By” from time to time, but it’s refreshing to have a show to watch like “Moone Boy” from the U.K. that’s so brand-spanking new. (For the record, “Are You Being Served” dates from 1972-85, “Keeping Up Appearances” is from 1990-95, and “As Time Goes By” – starring Judi Dench and Geoffrey Palmer -- is from 1995-2002.)

“Moone Boy” may or may not be available on public TV stations elsewhere, other than Long Island’s Ch. 21. I tried to find out this information and the search resulted in one of those dead ends that occur more often than most people seem willing to admit when they embark on searches on Google.

Fortunately, however, we have Hulu, where all 12 episodes from the first two seasons of “Moone Boy” are available to watch at any time.

I recommend you watch them all, but if you have time to watch only one, then may I suggest my personal favorite, the episode titled “Godfellas.” After watching it, you will never think about church altar boys in quite the same way ever again.

tv
3 comments about "'Moone Boy' Just Might Be The Best Sitcom In The Entire World".
Check to receive email when comments are posted.
Read more comments >
Next story loading