You Say Tomato, I Say Content: How ConAgra Leveraged A Story To Market A Brand

There is perhaps no greater symbol of the success -- or failure -- of content than the tomato. Produce something bad and your audience will let you know by pelting you with them, both figuratively and literally. But when ConAgra Foods decided to get into the content marketing game, its goal was simply to get its audience to eat them.

“There’s so much going on in the content marketing space, we wanted to see how we could use it to reach our consumers with a different lens,” says Lisa Vannerson, manager of interactive marketing at ConAgra Foods, which just completed a four-month test of an innovative content marketing campaign targeting a core consumer segment for its Hunt’s canned tomatoes brand.

Not surprisingly, the content campaign began with a story.

“It began with an insight that our consumers tend to skew a little older, Vannerson explains. “She’s an empty-nester but she still has this love of cooking and she wants to care for her children when they come back from school or for older parents.”

That was the motivation behind the narrative. The conflict was the fact that even though the prototypical Hunt’s brand consumer may be a bit older, she’s not old enough to be kicking back. so she’s likely busy, time-crunched and in need of new ideas for how to nurture and nourish her family when the opportunity presents itself.

While conventional advertising can deliver elements of that -- quick food prep ideas in 30-second TV spots, or slick recipe ads in women’s services magazines -- Vannerson said the insight presented the perfect opportunity for ConAgra to try its hand at something more organic, and a bit more native to digital media: editorially driven content distributed across lifestyle sites that are prone to reach those consumers.

The test proved so successful that Hunt’s is now evaluating a broader rollout of the program to see if it can use content to broaden its reach -- and its impact -- among its consumers.

Vannerson acknowledged that the metrics used to evaluate the campaign -- so-called “key performance indicators” -- are still a little soft and difficult to benchmark the way old school media buys, ads and brand metrics have been used in the past, but she says there are strong indications that the content was in high demand from both consumers and the publishers who distributed the content to them.

“The difference for us wasn’t just the ability to create the content, but the scale of creating relationships with publishers to distribute it,” she says, noting that so far the test appears to have delivered the best of both worlds -- demand from consumers and from publishers.

One way she knows that publishers demand the content is that several of them explicitly asked ConAgra for Spanish-language versions of the content so they could broaden the reach of their audience.

The publishers do that, says StudioOne Co-Founder and President Andrew Susman, because the content they receive is often as good or better than the content they can generate on their own. They get it for free and are able to insert their own advertising avails to generate revenues from content created and paid for by a brand.

Susman founded StudioOne in the late 1990s with former NBC sales chief Bob Blackmore at a time when content marketing on the Internet was still in its infancy. But they had a vision that the barter syndication model that worked so well on television -- high-quality content distributed to local affiliates in exchange for advertising time -- would work really well on the Web where distribution was no longer a barrier to entry -- content was.

It didn’t come easy, but the StudioOne team hung in there, striking seminal deals with big brands and stitching together a network of affiliate publishers to distribute it. And eventually the market came to them. Today content marketing is now part of Madison Avenue’s holy “paid, owned and earned” trinity, and Susman and Blackmore look prescient in retrospect. And even though they sold StudioOne last fall to holding company CHR Group for an undisclosed sum, Susman remains as engaged as ever -- selling, pitching, creating and presenting best pracitices for content marketing.

Importantly, StudioOne has always asserted explicit “church and state” demarcations between the brand content it creates and distributes and the editorial voices of the publishers who carry and distribute it. Every piece of content produced and distributed by StudioOne has an explicit disclosure that it is sponsored content, and publishers have complete control of the format they use to publish it -- either taking it in its entirety or various cut-downs and modules of the complete content package.

Susman says a typical campaign has upwards of five different versions that a publisher can adapt to their own page format.

All of the deals are priced to brand marketers on the basis of a flat fee, although Susman says that many “back into a CPM.” However, the goal is not to generate the cheapest impressions, but the most “engaged” impressions, and the StudioOne team considers bonus distribution to be the greatest indication of such engagement, because it is coming from publishers who are pulling the content to present it to their audience.

“For us, engagement means the amount of time people are spending on the partner’s site, plus some sort of context for that,” he explains, acknowledging that the definition of engagement still is somewhat subjective.

Ted McConnell, a long-time Procter & Gamble and Advertising Research Foundation digital chief who advises StudioOne, defines it as “the degree to which a consumer has incorporated or was willing to incorporate a message in the future,” Susman cites.

While StudioOne cannot guarantee that explicit outcome, if brands come up with the right story the way Hunt’s did, it can guarantee getting it distributed across a network with minimum audience guarantees, and ideally some bonus upside like Hunt’s achieved.

The trick, says Susman, is starting with narratives and content that are integral to the brand’s consumer. If you do that right, he says, people will want to consume it -- because, well, they want to consume it.

While that KPI may still be somewhat intangible, ConAgra’s Vannerson says the Hunt’s brand has a pretty good proxy: “Publishers are coming back to StudioOne and asking for more content from us.” 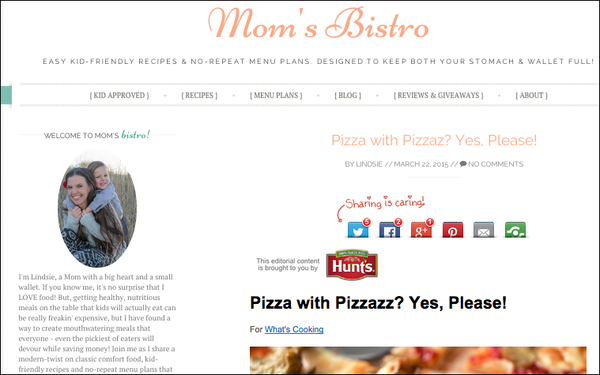