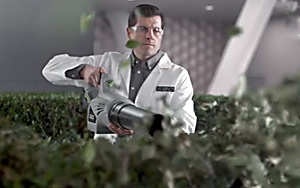 Traditional gas-powered lawn equipment is bulky, noisy, messy and smelly. In a new campaign, EGO Power+, a maker of cordless outdoor power equipment, is showing it has a better solution, in the form of advanced battery power.

A new television campaign shows off the technology (in the form of a 56-volt lithium ion battery) that makes the line of products as effective as their gas-powered counterparts, but easier to use.

“If you own a gas-powered lawnmower, you know they’re a pain in the ass to maintain, own, and operate,” says Vinny Warren, chief creative officer of The Escape Pod, the agency behind the campaign. “[EGO Power+] solves all the things you hate about gas-powered lawn mowers.”

Warren likens the products, which are available in Home Depot stores, to Dyson vacuum cleaners, which offered a new technology that had been unseen in a staid category. Along those lines, the advertising campaign focuses on how the technology (which includes a battery pack that can be exchanged among tools) is a revolution for the category.

“We’re in the business of building this brand, and we need to do it in as meaningfully as possible,” Warren says. “This isn’t some sort of quirky alternative [tool]; it’s a replacement for your gas mower.”

Television commercials in the campaign waste no time getting to business. In one spot for the lawnmower, a brief beginning shows a man struggling with a gas-powered mower (pulling the cord, filling a gas can, spending extra money) before cutting to a lab in which an EGO Power mower is running on a grass patch, and a voiceover explains it can cut up to two miles on a 30-minute charge. A second spot for a leaf blower goes straight to the lab, showing the blower moving leaves in a 360-degree circle as “the first cordless blower that exceeds the performance of gas.” Both spots use the tagline,“Power beyond belief.”

“The category is full of ads of someone on the backyard doing something vaguely funny,” Warren tells Marketing Daily of the approach. “We didn’t want to be lumped in with that.”