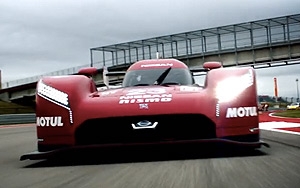 Automakers are usually as secretive about their racing technology as your average aerospace company is about its next x-wing fighter. It's not for you to know. But Nissan, which has spend the last few years focusing on making the racetrack a core aspect of its brand identity globally, is going the other way. The automaker, which has built a global branding position against its GT Academy reality show/Team Nissan farm program, is offering a virtual masters in NISMO (which is a portmanteau of sorts for "Nissan Motorsports").

The new content platform, celebrating Nissan's return to the Le Mans 24 Hour LM P1 (Le Mans Prototype Class) in June, basically lets people under the hood of its technical skunk works for its Le Mans prototype racing program. As Nissan puts it, “We want to provide an experience akin to being in the dugout at Yankee Stadium of a baseball game, or on the sideline with a manager in the Champions League of soccer, or on the balcony at Lords for a match of cricket.”

The program, which launched during Nissan's debut at the Silverstone FIA World Endurance Championship, is hosted at Nissan's NISMO.TV YouTube channel. It comprises a series of videos for lay folk on things like what an LM P1 car actually is; the difference between endurance and sprint racing; the difference between the front-wheel drive system on the race car and on, say, a Nissan Note; why does Nissan have its racing engine front-mounted; why does it appear that the big tires are in front; the importance of lubricants and cooling fluids. Michelin and Motul are participating brands in content on tires and lubricants/cooling fluids, respectively.

And, with a tie-in to GT Academy, there is also content on how Nissan is prepping drivers like Lucas Ordonez, who went from console-game “driver” in PlayStation 3 Gran Turismo, to GT Academy winner, to GT-R GT4 driver, to piloting the LM P1 car this year.

Nissan says the tie-in from a consumer brand perspective is that people come away understanding how the race track technology relates to your domestic car. “Lessons learned at Le Mans and other great tracks from around the world help us develop better road cars of the future,” says the company. The point is made clear in a promo video touting upcoming content. The video explains how Nissan engineers working on the racer are the same ones who work on Nissan's production vehicles, and how technology for the racetrack trickles down to street-legal vehicles.