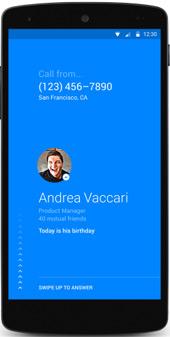 Ahead of its first-quarter earnings, on Wednesday Facebook unveiled a new caller-ID and business directory app named “Hello.”

Built by Facebook’s Creative Labs and Messenger team, the app connects directly with the social network so users can see who’s calling, block unwanted calls, and search for people and places.

“When you get a call, Hello will show you info about who’s calling you, even if you don’t have that number saved in your phone,” Andrea Vaccari, product manager at Facebook, notes in a new blog post. “You will only see info that people have already shared with you on Facebook."

With Hello, users can also search for people and businesses on Facebook and call them with a single tap.

Competing with established business directories from Yellow Pages to Google, people can use Hello to find the hours of operation for a business, make a reservation and get directions.

Users can also block specific numbers and adjust whether they want to automatically block calls from commonly blocked numbers. Blocked calls go straight to voicemail and can be reviewed in users’ recent calls list.

The new app is part of a broader effort by Facebook to embed itself into consumers’ mobile lives.