In Showtime's 'Happyish,' Unhappy Ad Man Is Sick Of Advertising 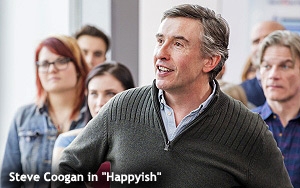 As “Mad Men” winds down to the end on May 17, a new series about the advertising business arrives to take its place.

It’s the anti-“Mad Men” -- so much so that the show’s main character, a creative director named Thom Payne, actually declares “F--- ‘Mad Men’!” in the premiere episode. The half-hour show is called “Happyish” and it premieres Sunday night (April 26) at 9:30 p.m. on Showtime.

Payne is played by Steve Coogan, who assumed the role after the death of Philip Seymour Hoffman, who was lined up to star in this series until he unfortunately died in February 2014.

At age 44, Payne is not quite in the throes of a midlife crisis. But on the career front, he’s being buffeted by many of the same forces that everyone in advertising and related media is facing these days, particularly those in their 40s or older who have been in the business for a while.

For Payne, these forces include new corporate leadership at the New York ad agency where he has worked for 20 years -- McMann Goldsmith & Tate (yes, sharp-eyed, older readers will recognize the McMann & Tate name from “Bewitched”). The new leaders come in the form of younger people, naturally -- the kind of young men who wear woolen caps indoors and are unable to talk about advertising and marketing in any context other than social media.

Payne is already tiring of the advertising business before he even hears about the changes at his workplace. “I work for Satan,” Payne says in a bit of voiceover narration in the premiere episode, as he makes his way to his Manhattan office after commuting all the way from Woodstock (which seems terribly far).

“I’ve worked for the dark lord for 20 years now,” he rants, “so I say this with a fair degree of authority: F--- ‘Mad Men’! There’s nothing cool about advertising. There’s nothing interesting. We do the same thing that everyone else in the world does these days. We kiss the zit-covered asses of arrogant, know-nothing teenagers! It’s 'Lord of the Flies' out there, folks! And everyone over 18 is Piggy!”

His new overseers want the whole agency to start rethinking -- and rebooting -- everything they do. One long-time client is especially irritating to the new management -- Keebler cookies, because of the brand’s long-time reliance on an advertising scenario in which cartoon elves are said to bake the company’s cookies in a hollow tree. Keebler happens to be one of Payne’s accounts and he balks at a plan proposed by the agency’s new creative management to replace the animated elves with real-life dwarfs.

But “Happyish” is more than an ad agency workplace comedy. About half of the action in the show takes place at Payne’s home in Woodstock, where his wife (played by Kathryn Hahn) is an artist and stay-at-home mom who looks after their young son.

In the two episodes I watched (out of the three that Showtime provided for preview), the homefront portions of “Happyish” were a lot less appealing than the workplace portions. One reason for this was that the wife, Lee, is an unattractive character who complains constantly about her Jewish mother and curses incessantly. I was going to write “curses like a sailor,” but Lee is so foul-mouthed that I felt that would be insulting to sailors, who probably don’t curse as much as she does.

I’m not being a prude here to warn prospective viewers about the language in “Happyish.” Even though we’ve come to expect such language in our “adult” comedies and dramas in recent years on a pay-cable channel such as Showtime, the filthy language in this show might be the most gratuitous -- and for the most part, unnecessary -- that I’ve heard in years.