What We Learned From The Bruce Jenner Interview 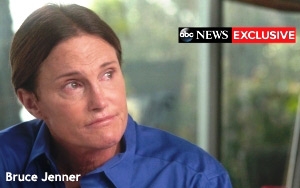 So Bruce Jenner is a man who likes to wear dresses. And he enjoys occasional get-togethers in his home with other men who like the same thing.

These are two things we learned from Diane Sawyer’s interview with Jenner that aired Friday night on ABC.

We also learned that sometimes, Bruce ventures out into the world dressed as a woman. According to Sawyer, he did exactly that after they finished one of their interview sessions. In a voiceover heard during the show, Sawyer reported that the two went out to dinner after they were done, and Jenner was dressed as a woman -- something he did not allow to be filmed for the show.

We didn’t really learn anything about this post-interview dinner -- such as where it took place, for example, or whether the sight of Diane Sawyer, a very recognizable celebrity, having dinner with a “woman” who some may have guessed was Bruce Jenner in drag (are we still allowed to use the word “drag”?) caused any kind of a stir or at least discernible murmuring, gawking or surreptitious picture-taking by other restaurant patrons.

We who watched the special -- all 16.86 million of us, according to Nielsen (a huge number for a Friday-night show these days) – did not get to see what Bruce looked like in his women’s wear, although we were teased several times with the possibility that we would get a glimpse of Bruce in a dress if we stayed tuned. The teaser copy was misleading.

However, we will eventually get to see this, since Jenner seems determined to remain in the public eye during this transformative period. Portions of the interview revealed that he is going ahead with his own reality series on E! in the coming months that will chronicle his transformation to female. And he seemed to promise Sawyer that he would sit for another interview with her after his transformation, perhaps in a year.

What else did we learn on the show? Among other things, various members of Jenner’s family have known about his “secret” for quite some time -- most notably his wife, Kris, who has known the longest. Stepdaughter Kim Kardashian has known for a while (and she has been supportive, Bruce said). His two daughters with Kris, teens Kylie and Kendall Jenner, have known about it too.

We also learned that of all the members of Jenner’s extended family, stepdaughter Khloe Kardashian is perhaps the least accepting of Jenner’s “lifestyle choice.” Bruce mentioned this but gave no details about it, leaving viewers to wonder about the current state of their relationship.

These items -- especially the revelations about Kris and Kim -- struck me as big news for the millions who avidly follow the Kardashian clan. I even predicted -- wrongly, it turned out -- that these Kardashian items would be the lead items on the list of news tidbits that would be reported the next morning in the New York tabloids. Instead, the papers went with headlines that reproduced an isolated quote from the interview: “I am a woman.”

Somewhere around the midpoint of the show, I began to feel uncomfortable, but not about this man’s apparent identification as a woman (well, maybe a little), his desire to wear women’s clothing and to transform, at least hormonally, into a person of the opposite sex. Bruce Jenner is free to do whatever he wants with his life, particularly since this is the United States of America, where such freedom is implied (and should be assumed).

My discomfort stemmed more from the show’s voyeuristic aspects -- as if I was being given an opportunity to linger too long outside someone’s open window to peer inside. Never mind that the owner of the house had thrown open the shades and allowed me to do so. It still felt like too much information about a matter that some might say is better handled privately, within the family sphere.

Of course, these Kardashian-Jenners are not an ordinary family. They live public lives, which makes it difficult to deal with anything privately.

Most striking to me was the positive coverage of the interview and the angle adopted almost unanimously in the news media that Jenner’s coming out represented a watershed moment in civil rights. Personally, I’m never comfortable with anointing individuals as “symbols” of anything -- as if Bruce Jenner had morphed into the Rosa Parks of transgender rights. On the other hand, Rosa Parks herself became one of these symbols, and that was never bad for anyone except segregationists.

And certainly, if Jenner’s open discussion of his gender-identification struggle prevents a confused teenager somewhere from committing suicide, then that’s a benefit that’s not to be taken lightly.

celebrity, gender, tv
4 comments about "What We Learned From The Bruce Jenner Interview ".
Check to receive email when comments are posted.
Read more comments >
Next story loading