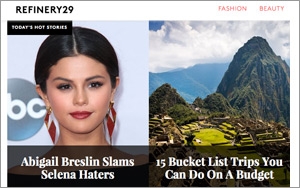 Scripps, the company behind HGTV and Food Network, and WPP Group, the large media agency group, have invested $50 million. This is in addition to the $30 million the company raised in its Series D round of funding.

The company, founded in 2005, employs more than 250 people and is based in New York with an office in Los Angeles, pulling in 25 million monthly unique viewers. According to the company, that means it reaches one out of every four millennial women in the U.S.

All this comes in the midst of NewFronts presentations. In that regard, Refinery29 wants to expand its video efforts.

Philippe von Borries, co-CEO and co-founder, has said: “Over the next five years, multibillion dollar media brands will grow out of the digital core... We are focused on vastly expanding our media and entertainment brand, creating smart, provocative editorial, video and social content at the intersection of style, culture, and independence.”

The company says it is profitable and has doubled its size in each of the last three years.