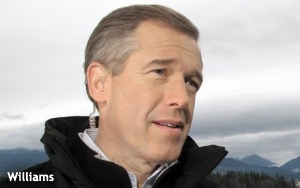 That’s the thing about the passage of time: It makes you accustomed to the way things are now, and makes it easier to forget something that seemed -- at least until recently -- to be receding into the past.

Williams was suspended in February from “The NBC Nightly News” -- for a planned term of six months -- following the revelations that he exaggerated or downright fibbed about various experiences he had covering stories in hot spots such as the Iraq War and New Orleans in the aftermath of Katrina.

Mild-mannered Lester Holt took over as interim anchor on “Nightly News” and life went on, although the tumult at NBC is credited with paving the way for the competition at ABC -- David Muir of “World News Tonight” -- to gain on NBC and even win the weekly ratings race a couple of times.

Under the six-month suspension plan, Williams would be due to return to the “Nightly News” anchor desk in August. But earlier this month, his return was thrown into doubt as the story flared back into the limelight with the apparent completion of an internal investigation at NBC into Williams’ storytelling.

NBC didn’t comment on the findings, but suddenly the revelations were being reported in “prestige” media such as The New York Times and The Washington Post. The gist of both stories was that the audit had found even more instances in which Williams embellished stories about his journalistic derring-do.

In light of these new examples, the odds suddenly seemed longer that Williams would ever return to his job. In addition, the revelations -- coming from unnamed sources -- sparked speculation that NBC was leaking the news of these new tall tales intentionally, as part of a strategy aimed at making their case in the court of public opinion for barring Williams’ return.

Then there were stories about money that suggested that NBC will be required to pay Williams what he is owed under the terms of his multi-year contract -- tens of millions of dollars, according to some of the stories -- if the company dismisses him. If he resigns, the stories indicated, the financial “burden” on NBC would be a lot lighter (or maybe even nonexistent -- I’m not sure).

The stories about the multimillion-dollar payoff obligations (if true) reminded me of the Conan O’Brien debacle that played out in the winter of 2010 when NBC was trying to engineer the return of Jay Leno to late-night after Leno’s nightly prime-time show failed and Conan’s “Tonight Show” was scoring lower ratings than Leno’s.

A huge payoff loomed at the center of that story too -- an estimated $40 million that Conan would be owed if NBC removed him from “The Tonight Show” so soon after he began (just that previous fall).

By most accounts, O’Brien eventually got the money, but not before NBC floated a ludicrous plan to bring Leno back to late-night for a half-hour show that would start at 11:30 and lead in to Conan’s “Tonight Show” at midnight. NBC execs must have known Conan would never accept such a “demotion” in which he, the host of “The Tonight Show,” would have to follow Leno every night. Conan did not accept it, and this idea helped pave the way for his exit.

So here we are again, this time with Williams fighting with NBC, although it’s a battle with a very different set of circumstances. Not different are these stories about multimillion-dollar payoffs and NBC’s alleged strategizing behind the scenes to force or otherwise persuade air talent it no longer wants to quit.

These scenarios would suggest a full-fledged war is now underway between NBC and the Williams “camp” (there’s always a “camp,” according to these kinds of stories). And if the conflict has risen to the level of a “war,” then how can he possibly return?