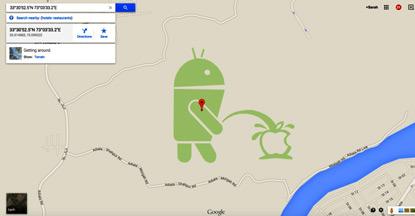 Google took steps to temporarily shutter its Map Maker Monday after pranksters used it to draw the Android icon peeing on an Apple Logo and other spam-type acts of vandalism. It appeared in April 2015. The tool shut down as Google rethinks its approval process. The edits now go through a manual review process, but that could take weeks as requests mount.

It's clear that fixing the process will take longer than a few days. Google will likely need to automate much stricter processes, but turning off an automated monitoring system can create a very large backlog of edits requiring manual review. This in turn means that edits will take a long time to get published.

Map Maker, an online tool, allows users to upload new data to Google’s online mapping service. The idea to crowdsource edits means help, mostly, where detailed local maps are not yet available. Many of the icons would show points of interest or new roads.

"We have hence decided to temporarily disable editing across all countries starting Tuesday, May 12, 2015, till we have our moderation system back in action, Pavithra Kanakarajan, project manager at Google, wrote in a blog post. "This will be a temporary situation and one that we hope to come out of as soon as possible."

"While this is a very difficult, short term decision, we think this will help us get to a better state faster. More importantly, we believe it is simply the right thing to do to all of you, our valued users who continue to edit with the hope that your changes might go live as fast as you've been used to," she wrote.

It's not the first time Google experienced similar fraud. In 2014, Bryan Seely, self proclaimed "ethical hacker," per LinkedIn, recorded third-party calls to demonstrate vulnerabilities in Google Maps he has been aware of for more than five years. At the time, he said the fake listings were up for four days and continually ranked No. 2 every time he checked Google Maps.