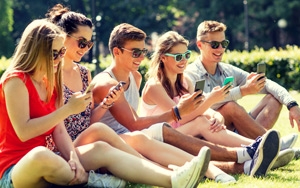 Smartphones have become nearly as common in American households as DVD players, and the two devices trail only televisions as the most ubiquitous consumer electronics device in the country.

According to the Consumer Electronics Association’s latest “Ownership and Market Potential Study,” 72% of U.S. households own at least one smartphone -- an 8% jump over the past year. Smartphones now trail only DVD/Blu-ray players and televisions, which are in 78% and 97%, respectively, of American households."

The widespread adoption of smartphones and tablets has fundamentally changed the way that Americans consume content. Streaming subscription services such as Netflix and Amazon saw a 6% increase to reach 40% of U.S. households, according to the CEA.

Beyond the media world, wearable fitness trackers more than doubled their household penetration to 11% in 2015, and smart home device ownership stands at 12% of households. Smartwatches, meanwhile, remain a growth category to watch -- with 5% of U.S. consumers already owning one and 6% saying they plan to buy one over the next year.

“We continue to see core products such as TVs, DVD/Blu-Ray players, laptops and digital cameras, at the top of household (HH) penetration. However, it is the newer technologies that are seeing the largest growth, such as tablets, wearable fitness trackers and digital media streaming devices,” Samantha Power, senior director of market research for the CEA, tells Marketing Daily. “All of these technologies have two things in common: connectivity and convenience. Consumers increasingly look to technology to make their lives easier and more enjoyable.”