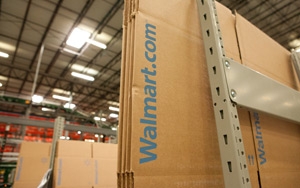 Sales are up a bit again at Wal-Mart Corp., its e-commerce is gaining in the double-digits, and mobile traffic increased 100%. But overall, the company, which earlier this spring announced that it would spend $1 billion on improvements for its workers, disappointed observers. Investors don’t like the way those wage gains are eating into profits. Social activists don't think $1 billion is enough. And marketing pundits are wondering just how much labor controversy is weakening the mighty Walmart brand.

While many chains are under increasing consumer scrutiny about how poorly they treat workers — with competitors like Target and TJMaxx also scrambling to raise hourly pay — Walmart is seen as the biggest villain, and routinely ranked as America’s most hated retailer.

Overall, the Bentonville, Ark.-based company says revenue slipped 0.1% to $114.8 billion, and its profit fell 7% to $3.34 billion. In the U.S., however, sales rose 3.5% to $70.2 billion, and on a comparable store basis, sales advanced 1.1%. And operating income fell about 7%. “We’re not where we want to be in every store, but I’m pleased with the progress that I’m seeing,” says president and CEO Doug McMillon, in remarks prepared for a post-announcement conference call.

Online sales gained 17% in the quarter, with changes including a simplified checkout process, and an improved experience on mobile devices. Mobile traffic grew 100%, and conversion rates also increased. And the company says its Neighborhood Market is also doing well, with comparable store results up nearly 8%.

But he spent much of the call covering what the retailer is doing to invest in people, elaborating on initiatives first announced back in April. Those include investing in starting wage rates, adding department managers and wage increases for most positions, as well as tests underway to improve scheduling and training.

Still, even as its efforts to improve its image cut into profits, Robert Passikoff, president and founder of Brand Keys, a New York-based customer loyalty and brand engagement consultancy, says the company is fighting an uphill battle in trying to change people’s opinions about its corporate behavior.

“While this has been a problem of Walmart’s for years, in the past it mattered less,” he says. “People might say they hated Walmart for the way it treated its workers, but they’d shop there anyway. But as other stores, including warehouse clubs and dollar stores, make an impression on shoppers with their low-cost merchandise, Walmart becomes more vulnerable.” Besides being fueled by pricing parity, he says that vulnerability is also increased by social media, which lets people spread the scorn around quickly. “We really are seeing more of these social issues lead people to question the believability of brands.”