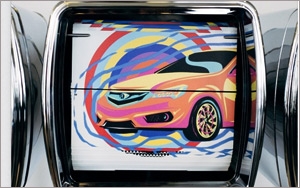 Acura is experimenting a lot this year to find its consumers on social channels that match their lives. The Honda luxury division, aggressively promoting its new ILX compact sport sedan, the gateway to Acura, to younger consumers, recently executed a social-media music campaign with SoundCloud. This week Acura launches “Catch it if you can,” a social media campaign featuring five automated 3D flipbooks, the five together that is intended to evoke the five LED lamps in the ILX’s Jewel Eye headlights.

For the program, via Razorfish Global unit Ignition, Acura tapped five popular Instagram and Tumblr content creators to make 60-second quick frame flipbooks of the 2016 ILX. Acura and Ignition are posting one looping Instagram video per day for five days. The program includes a sweepstakes element where people who “catch” the ILX by taking a screen shot of the video with the ILX in the frame and share the picture, tagged with #ILX2016 can be one of five daily winners to receive limited edition prints of the art.

“Essentially, what we did is go to five artists and collaborate with them to create flipbook art,” says Alicia Jones, manager of social marketing for Honda and Acura brands at Torrance, Calif.-based American Honda Motor. “We asked the artists to create a unique, new piece of art inspired by ILX, and to give us a feeling of fast through their art.” She tells Marketing Daily that the five books are installed in a row of five chrome cubes and created in such a way that the ILX seems to drive from one to the next. “We put a video compilation together and merged them. All five pieces seed from one to the other.”

“We really wanted to try something new, since this car is aimed at younger buyers; we are trying to work with up-and-coming artists.” The ILX 8-Speed Playlist campaign with SoundCloud, which launched in March, involved eight up-and-coming artists who wrote custom music, each one inspired by one of the gears of the ILX’s eight-speed transmission. Just like shifting, the songs increase in intensity as you move up the playlist. The participating artists included Kisses, Bear in Heaven, starRo and Bit Funk.

Jones says Acura's Tumblr account is the hub for that campaign, where the songs are downloadable, with the idea that drivers can listen to them as they drive.