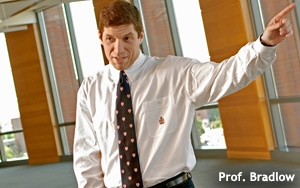 As spring gets ready to turn into summer, it can only mean one thing: That MBA programs around the country are about to unleash their latest graduates, with many determined to land a job in marketing. To find out what this batch expects from the world, Marketing Daily checks in with Eric T. Bradlow, chair of the marketing department at the Wharton School of the University of Pennsylvania.

Q. It’s been a tough few years for all new graduates, but now that hiring has picked up, what’s changing?

A. It’s a good market, and there’s a bigger supply of jobs. What’s interesting is that when people think of Wharton, you think about grads looking for jobs in finance and consulting, or maybe packaged goods. But now, there’s an entirely new ecosystem, and what kids are attracted to has changed. Sure, some go to Wall Street. But with Facebook, Microsoft, and Amazon influencing them, there’s a new set of verticals. We now send as many students to Seattle and Silicon Valley as to more traditional fields.

A. Yes. It used to be people more interested in design, creativity and psychology who chose marketing. Now we get plenty of quant jocks, too, and people coming in from economics and statistics. Because data has made it easier to measure the ROI of marketing, it’s appealing to a wider group of students.

Q. What kinds of jobs are they hoping to find?

A. Those that offer rapid growth. And I don’t just mean money. They want responsibility for P&L. To make something grow, to make a difference, to have some kind of social impact. The idea of working your way up slowly, of having to put in a certain amount of time at a certain level in order to advance, doesn’t appeal to them.

Q. So they expect to make it big while they’re young?

A. Yes, and they see the success of so many young executives as very empowering. We just had the two founders of Warby Parker speaking here — they are both alums — and between the two of them, they’re 67. So new graduates see that as the new bullseye, and say, 'Why not me?’

A. People often think it’s things like social media, mobile, and online advertising, but for all of our graduates, it’s more. They understand how much data can come from nontraditional sources, what data can do and how important it is to monetize it. And as I said, they understand digital is key to measuring marketing’s ROI, which is what gets us a seat at the big boys’ table.

Q. What has surprised you most about the class of 2015?

A. One is the number of people who have plans to start their own business, either now or soon. I’ve always been proud of these graduates, but especially in the last two years. Now that the pressure is off to find a job, any job, they are networking and adding to their skills. They’re all driven and want to be successful, of course. But they are more likely to redefine success in their own terms. They are thinking about bigger missions.