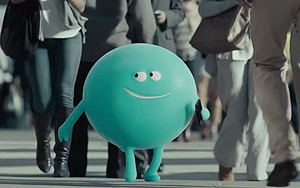 Living in a place that’s always happy and carefree seems nice, but at some point, it’s time to get out into the real world.

Roughly a year after introducing animated characters in an animated setting to depict the joyful world of Cricket Wireless, the AT&T-owned company is introducing them into the real world.

“What we’ve heard from our customers was that they don’t want a lot of finger-pointing [in advertising], but they don’t mind comparison,” Cindy Matthews Rozier, executive director of brand, advertising and merchandising for Cricket, tells Marketing Daily. “We thought -- what better way to compare ourselves to the competition? Optically, this is the best way to express how different we are.”

In the introductory campaign last year (which came on the heels of the brand’s acquisition by AT&T and merger with its Aio prepaid brand), the characters were intended to showcase a friendly experience as Cricket reintroduced itself to consumers. This time around, the colorful beings appear on the streets and in other places where they can be encountered by people using their phones on a daily basis (such as on a bus or park bench). “Doesn’t it seem the wireless world could use a smile?” asks a voiceover before explaining Cricket’s one-price plans (including taxes and fees) and wireless network strength. The spot concludes by describing Cricket as “the happiest place in the whole wireless world,” and uses the tagline “Something to smile about.”

“When we were developing [the initial] brand campaign, our research told us consumers want to do business with a brand that’s not a hassle,” Rozier says. “The animated characters are there to show that we’re a different and a delightful proposition within the wireless space.”

Since introducing the characters last year, the company says it has seen a 26% increase in brand credit, a 300% boost in unaided awareness in new markets and a 500% jump in consideration in markets that already have Cricket service.

The ads, from agency Argonaut in San Francisco, will run on major television networks throughout the summer.