With Dave Gone, His Time Slot Cools Off With Crime-Drama Repeats 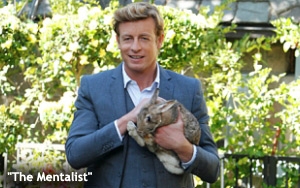 Bet you didn’t know this, but it’s not Stephen Colbert -- it’s “The Mentalist”!

That’s right -- no sooner had David Letterman closed up shop on CBS Wednesday night than a rerun of “The Mentalist” took up his time slot the very next night. And reruns of this former CBS crime series, which ended its seven-season run on the network in February, are scheduled for 11:35 p.m. Eastern for the foreseeable future, though it’s possible that other crime-drama reruns will also be cycled in over the next few months.

This is the strategy devised by CBS to keep the 11:35-12:35 hour warm over the summer months for Colbert, whose new version of “Late Show” won’t be unveiled until September. But rather than keeping it warm, might this bit of tepid scheduling actually cool it off?

Or, to put it another way: With CBS essentially abandoning this crucial, competitive hour of late-night for almost four months, it would seem that the beneficiaries of this strategy will be the two Jimmies -- Fallon and Kimmel -- who I expect will draw at least some of the Letterman faithful who now have no show to call their own.

A four-month gap between the farewell of one long-time late-night host and the debut of his replacement is unusual, if not unprecedented. Jay Leno assumed the host’s job on “The Tonight Show” on the Monday after Johnny Carson said good-bye. Conan O’Brien replaced Leno in the same manner, after a single weekend. Fallon’s new “Tonight Show” debuted just a few weeks after Leno left the second time, since it was during the winter Olympics on NBC.

For all intents and purposes, Colbert hasn’t been seen since he closed up “The Colbert Report” on Comedy Central last December. Presumably, he and a team of producers and writers have been busy formulating plans for his takeover of “Late Show,” and they may even be ready to take occupancy of the time slot now (or would be ready if they faced a premiere-date deadline of, say, this coming Monday -- or perhaps Tuesday since Monday is Memorial Day).

But that is not the case, as CBS might feel it will get more bang out of Colbert’s debut by bringing him on-line at the onset of the fall TV season (whose first “official” day would appear to be Monday, Sept. 21, 2015).

One issue in the decision may have been a physical reality: CBS intends to continue originating the show from the Ed Sullivan Theater and perhaps felt there was no way to get it ready for the new-look Colbert “Late Show” in just a few days after the exit of Letterman and his staff -- who were there for 22 years and probably pretty well-burrowed into the place.

On the other hand, as the New York Post reported yesterday -- complete with video and photos --stagehands wasted no time demolishing the Letterman “Late Show” set mere hours after Dave said farewell, smashing its models of New York landmarks into little pieces and then carting them away in dumpsters.

Perhaps if a new Colbert set had been designed and built off-site, a team of workers laboring around the clock over the Memorial Day weekend might have been able to install it in time for a Colbert debut next week. Or maybe not.

Whatever the reasons for this late-night sabbatical on CBS, this crime-drama rerun scenario is reminiscent of a very different era in TV. You might remember this: Before CBS had a presence in late-night in the pre-Letterman era, the network used to program crime-drama repeats in the time period. They called it “Crime Time After Prime Time.”

Today, however, the TV world is a lot more competitive. One would think that CBS would want to hurry to get Colbert on the air so as not to create a four-month gap in crucial late-night programming and thus deliver thousands of viewers to the competition in the process.

Or maybe CBS might have considered moving James Corden’s “Late Late Show” up to the 11:35 time period for the summer to keep the time period warmer than “The Mentalist” would, and give Corden some much-needed exposure to a potentially wider audience, if just for a few months.

And if they did that, they could start referring to him as “Jimmy” Corden, which would make it three Jimmies at 11:35. And wouldn’t that be great?

broadcast networks, tv
3 comments about "With Dave Gone, His Time Slot Cools Off With Crime-Drama Repeats".
Check to receive email when comments are posted.
Read more comments >
Next story loading