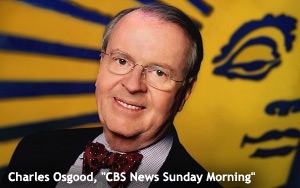 What’s the best TV show for an author to appear for driving book sales?

A very informal consensus in the book biz seems to be “Charlie Rose.” And a very close second: “CBS News Sunday Morning.”

The subject arose in several conversations held this week on the floor of BookExpo America ’15. This is the annual gathering of book publishers, both large and small, in which upcoming titles (and existing ones) are promoted. Attendees included publishers, literary agents, booksellers (from whatever big chains are left such as Barnes & Noble, and small independent bookstores), librarians, publicists, journalists and authors, both established and prospective. This year’s BEA was held at the Javits Center in Manhattan from Wednesday through Friday (May 27-29).

Certainly, this “consensus” is purely anecdotal. But it’s also true that TV talk shows on which to book authors and promote books are scarcer today than they used to be. Authors still turn up from time to time on the late-night shows, for example, but such appearances are rare when compared with the other categories of guests that are much more prevalent -- basically, actors and actresses from TV shows and movies, plus current music stars.

David Letterman’s “Late Show” was good for a few author appearances every year. And Craig Ferguson had author guests every once in a while on his “Late Late Show.” Of course, these two hosts are now gone.

Jon Stewart’s “Daily Show” features more authors than most other late-night comedy shows, but opinions seem to be mixed on the effectiveness of a “Daily Show” appearance for spurring subsequent book sales. Or to put it another way: Sometimes it does and sometimes it doesn’t. And in any case, Stewart’s leaving soon.

One group of TV shows that you would think would be a great place to get authors and their books out in front of a mass audience (or whatever “mass” means these days in the television biz) are the network morning shows -- “Today” on NBC, “Good Morning America” on ABC and “CBS This Morning.”

But publicists say that’s not necessarily the case. Of course, such results are dependent on a very significant variable -- the quality of the book and its subject matter. Still, publicists say that, generally speaking, subsequent book sales following appearances on the network morning shows -- as weighed against the large audiences for these morning shows -- are comparatively, and surprisingly, small.

So what makes “Charlie Rose” and “CBS News Sunday Morning” better than these other shows? It comes down to a handful of factors, including the amount of airtime and the characteristics of the audiences for these shows.

On both shows, the author segments are generally longer than those seen anywhere else on national TV. Interviews on “Charlie Rose” can last anywhere from 20 minutes to the entire hour -- which is not uncommon.

On “Sunday Morning,” feature pieces can be somewhat longer than similar segments produced for weekday morning shows, mainly because a Sunday morning show such as this one lends itself to the adoption of a slower, more relaxed pace, allowing for greater depth.

You might even hypothesize that the viewership for “Sunday Morning” is a more captive audience than those who watch the weekday morning shows. On weekdays, a morning show might be little more than background noise to some viewers who are going about the business of preparing for their day. On Sunday morning, viewers probably pay closer attention because they are less distracted.

And that brings us to another probable characteristic of the audiences for “Charlie Rose” and “CBS News Sunday Morning” that make them a great place for authors to promote their books. It’s probably accurate to assume that the audiences for these two shows are older than the customary 18-49 group targeted by most TV networks these days. And most importantly, they still read books.