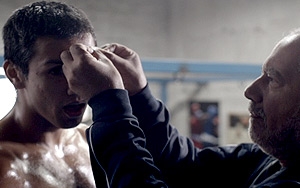 Adhesive brands for wounds and abrasions are about product attributes. But Band-Aid, like Kleenex or even Xerox, has so much brand equity that for most people it pretty much has become the name for the category, which is kind of a curse. People with a cut don't say, “Do you have an adhesive strip?”

With a new campaign, Johnson & Johnson brand is taking the unusual approach for the category of focusing on what the brand means rather than on its product-differentiating technology attributes. The television and digital/social campaign, #CoveringIsCaring, grapples with the one expression of caring that is pretty much universal.

The effort, via BBDO, kicks off with a 60-second spot on Sunday, plus PR, digital and social activations involving social influencers and education. The latter, on the brand’s site, aims to be a corrective to the common belief that the best way to treat a wound is to desiccate it via exposure to the air. At the same time, Band-Aid is continuing a program whereby fashion icons are coming up with unique designs for the strips to appeal to adults, plus licensing deals to do likewise for kids.

Hanan Wajih, senior brand manager of Band-Aid brand, tells Marketing Daily that the campaign is part of a broader marketing effort to build on the company's heritage. "For Band-Aid, it's part of our DNA transformation of turning hurt into care, by going to the emotional action of caring and covering."

The new TV spot shows people in “loving moments” caring for others all involving covering. One image is a trainer putting a bandage on his fighter's forehead, another a parent wrapping his child in a towel, and other scenes. “We tend to focus on product and technology, but this year we are really looking at heritage and brand equity. We have been successful at that and wanted to dial it up because that action of caring and covering is really powerful,” says Wajih.

Wajih says another prong of the effort is aimed at kids and social influencers through passion points like fashion. The company partnered with fashion and food blogger Joy Cho and her “Oh, Joy!” social channels. She posted about the partnership on Friday and will be creating content for Johnson & Johnson's website, Healthy Essentials, which provides healthy tips and tools for consumers, as well as coupons and promotions.

There is also a trend toward designer Band-Aids both for kids and adults, and Band-Aid is doing work on that front as well. “We did our first in 2010 with Cynthia Rowley and found that when we couple fashion designer with an adhesive strip, it doubled as a fashion accessory,” says Wajih. Last year, the company partnered with J. Crew and Isaac Mizrahi. The effort for kids products involves licensing characters from Disney for Band-Aids with “Star Wars,” “Avengers,” “Peanuts,” and “Spider Man” featured on the strips and packaging.