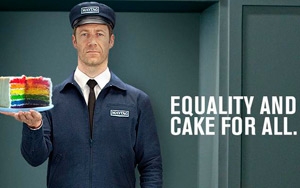 With the Supreme Court expecting to rule over gay marriage, the recent outrage in Indiana and Bruce Jenner's Caitlyn announcement, lesbian, gay, bisexual, and transgender (LGBT) rights are currently at the forefront of American culture and the Whirlpool Corporation and its agency DigitasLBi want to demonstrate its support for those rights.

Whirlpool and its agency introduced Twitter and Facebook messages earlier this week that show the Maytag Man supporting gay marriage in honor of June being LGBT Pride Month. The younger, hipper spokesman is shown simply holding a rainbow-colored cake with the message "cake and equality for all" and "proud to be in any home." The image refers to Indiana’s controversial Religious Freedom Restoration Act that allows bakers to refuse to make wedding cakes for same-sex couples.

Already these Maytag messages have gone viral and are resonating with consumers. On Twitter, Maytag says this post has performed 419% better than its typical posts. And in terms of organic reach on Facebook, the Pride post performed 846% better than a standard still photo post and received numerous positive responses and words of praise.

Although there has been some paid media behind this post as Maytag does with many of our social posts, executives are surprised and pleased by its reception.

"We have long been committed to equality and pride ourselves on a diverse workforce," says Brendan Bosch, senior brand manager for Maytag Brand. "In fact, Whirlpool Corporation was the first appliance company to achieve a 100 score on the Human Rights Campaign’s Corporate Equality Index -- a recognition proudly held for more than a decade. Maytag has shown support for the LGBT community in the past, and the support and positive feedback has been inspiring. Our social post in honor of Pride Month last year was a top performer in terms of engagement. We felt it was important to continue to recognize the contributions and strides being made in our society in support of this diversity."

Maytag first introduced its iconic spokesman the Maytag Man back in 1967 when its then ad agency Leo Burnett developed creative to convey how its appliances made repairmen the "loneliest guy in town." The new Maytag man (played by actor Colin Ferguson) was introduced in 2014.

The brand spent $49.99 million on advertising last year, up from $23.42 million in 2013, according to Kantar Media. As Whirlpool’s agency of record since 2001, DigitasLBi is responsible for all above-the-line creative, experience design, digital creative, media planning and technology.