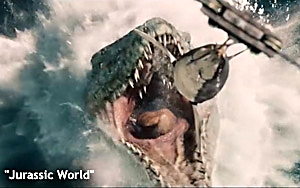 One of the biggest expected summer movies, Universal Pictures' “Jurassic World” -- set to open on June 12 -- has spent nearly $30 million in TV media since the first commercials aired in November, according to TV advertising tracking company iSpot.tv.

The bulk of TV spending on the movie started a little over a month ago, on May 4. In the last two weeks, the movie studio has spent some $15.1 million in TV advertising.

Overall U.S. media spending for “Jurassic World” could be $65 million, according to analysts, when accounting for all media spending, including marketing partners.

Estimates are that “Jurassic World” could pull in $120 million in U.S. box-office revenue in its first weekend -- which would make it the third-best opening ever. International sales could add at least $250 million in its first three days.

The highest TV spending for the movie has been on recent NBA games and playoffs -- some $2.27 million overall, with the NBA Finals so far pulling in $934,855 through four games. CBS episodes of the “Big Bang Theory” have been taking in $1.3 million for the movie.

Overall individual network spending, since the first TV commercials were run in November, have been pretty even among the big broadcast networks -- Fox, $2.75 million; NBC, $2.73 million; and ABC, $2.4 million.

For the last two weeks, “Jurassic World” has garnered 14.8 million online views of its trailers, with some 256,586 social actions, according to iSpot.tv. Views on YouTube for its trailers are at 63.9 million.

Research from iSpot.tv comes from fingerprinting technologies for the audio and visual elements of national TV ads in real-time. In addition, it tags and tracks the airings and measure digital reactions explicitly linked to ads across Facebook, Twitter, YouTube and all major search portals.