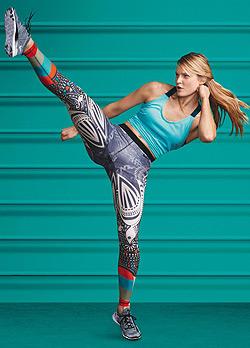 Thanks in part to its new marketing effort aimed at women and improving results in the running category, Nike posted stronger-than-expected results for its fiscal fourth quarter. With its CEO crowing about “outstanding” gains in both sales and profits, the company says its fourth-quarter revenues climbed 5% to $7.8 billion, or a 13% leap on a currency-neutral basis. (Sales for the Nike brand rose 13%, while sales for Converse increased 14%.) And its net income jumped 24%. The company says results were strong in all geographical regions, and in every category but men’s football. And future orders for athletic footwear and apparel scheduled for delivery through November are up 2%, or 13% on a currency neutral basis.

For the full fiscal year, sales hit $13.7 billion -- a 12% advance from the prior year -- marking its fifth consecutive year of double-digit revenue growth.

The Beaverton, Ore.-based company says sales in its women’s division got a 20% lift, thanks to its new “Better for it” marketing push, launched two months ago, with sales reaching $6 billion for the full fiscal year. So far, the effort has collected more than 80 million online views.

"'Better for It” resonated with consumers because it wasn’t just a campaign,” says Trevor Edwards, president of the Nike brand, in remarks prepared for its conference call. “It was a call-to-action for all athletes to push themselves to be their best. And it was served by the global community of women who interact with Nike, and each other, every day for inspiration.”

He also says the company is continuing to add premium services aimed at women, including bra fitting, pants hemming and gait analysis.

He also called out the company’s running results, an area that has been troublesome industrywide.

For the first time, its annual e-commerce sales passed the $1 billion mark.

Industry observers were impressed. “We think it’s hard to walk away from tonight’s call without feeling that perhaps, management has opened a 'new door' into the visibility of the company’s long-term potential,” writes Dave Weiner, an analyst who follows the company for Deutsche Bank, following its conference call. “To focus on another quarter of impressive futures orders, or the clear global momentum which the company/athletic space is experiencing, or as Nike as one of the only ‘premiumization’ stories in discretionary, would only tell part of the story. Nike is clearly a company with many design, engineering, and operational strategies which aim to ‘solve problems,’ and it feels like those are starting to materialize.”