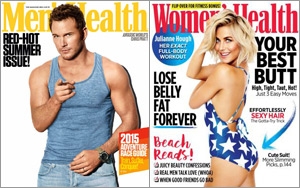 Another big magazine publisher is jumping into the TV business: health and fitness publisher Rodale Inc. has signed a deal with United Talent Agency to create scripted and unscripted programming for a variety of media platforms. This is the first time that Rodale has signed up for representation by a Hollywood agency.

Under the terms of the development deal, UTA will help Rodale create original programming around titles and franchises including Prevention, Men’s Health, Women’s Health, Runner’s World, Bicycling and Organic Life.

The goal is to expand the reach of the brands through multiplatform video, including cable TV programming. The reference to unscripted programming would suggest that some of the new projects will fall under the category of reality TV.

Rodale joins a growing list of magazine publishers that have begun to develop TV programming.

In June 2014, Twentieth Century Fox Television and Condé Nast Entertainment announced that they had entered into a “first-look” agreement for Condé Nast to develop and produce broadcast and cable TV projects for Fox. CNE has also produced content for other networks include “Vanity Fair Confidential,” airing on Investigation Discovery.

Also in 2014, The Atlantic joined forces with PBS’ “News Hour” to air regular broadcast stories based on the magazine's enterprise reporting. Hearst’s Esquire magazine lent its brand to an eponymous cable network launched in September 2013.

More recently, in March Vice and HBO announced that the premium cable channel will begin carrying a daily, half-hour newscast produced by Vice Media, which will appear five days a week, 48 weeks a year. The daily newscast extends HBO’s previous partnership with Vice, which has been producing a newsmagazine for HBO since 2013.