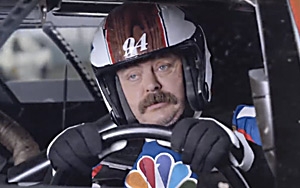 With NBC starting its 10-year partnership with NASCAR at this weekend's raft of races, including the Firecracker 250 and Coke 400 at Daytona International Speedway, the network is doing a "big event" marketing strategy to get the word out. the effort includes TV spots featuring drivers, out-of-home, events at race markets, print, radio and digital.

Bill Bergofin, SVP marketing at the network, tells Marketing Daily that the campaign is big, and designed to bring in a new audience. “It's been a number of years since NASCAR has been on NBC, so we are putting tremendous effort behind it. A lot of our approach is about creating cultural relevance beyond just saying ‘watch it.’ It's about getting people into the sport.”

The network's marketing efforts started months ago, notes Bergofin. “We started promoting it earlier, starting with the Sochi Olympics. We ran a 60-second spot, a cut down version of a film for the web, which was a comedic call to arms that NASCAR is the cure for a everything wrong with America, and we got a lot of buzz around that.” That two-minute web film features “Parks and Recreation” star Nick Offerman, who raps about how NASCAR is an elixir vitae for America’s growing diffidence, while a trio of women dance and sing a funky chorus with a race car in the background. There were also promotional elements on NBC Sports Group’s coverage of Super Bowl XLIX,

Ads that ran in June included one where NASCAR racers drive around America with big bullhorns mounted on the roof. They tout the virtues of Americans' freedom to do what they want. To reach a new fan base, NBC Sports Group launched a rock-themed spot called “Get Closer to NASCAR.”

Bergofin says a key message is around NASCAR's authenticity, a back-to-basics “all things America” approach, with a sense of national pride, especially around the July 4 weekend.

The campaign is on TV and digital properties of NBC, NBCSN, USA, CNBC, MSNBC, Golf Channel, Syfy, Bravo, E!, and others. Online, NASCAR on NBC banner ads are running across NBCUniversal’s digital platforms including, NBC.com, NBCSports.com, GolfChannel.com, CNBC.com, and MSNBC.com. They are also on YahooSports.com, through NBC Sports Digital’s partnership with Yahoo Sports.

Social media elements include Periscope and FaceBook Q&A’s with two-time Daytona 500 winner Dale Earnhardt Jr. “A great thing about NASCAR is the approachability of the sport, and accessibility of drivers. We have been able to deliver this with longer creative to generate interest among wider diversity audience.”

At races, NBC Sports has a free-to-ride “Bumper NASCAR” where each car is wrapped as a real race car. The installation starts with the Subway Firecracker 250 NASCAR Xfinity Series, and Coke Zero 400, and Sprint Cup Series races throughout the weekend.