With Doors Opening In Cuba, WPP Establishes A Beachhead 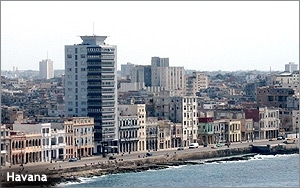 As the U.S., UK and other Western nations are taking steps to normalize relations with Cuba, WPP has been maneuvering to establish a small presence on the Caribbean island nation .

WPP intends to expand in a bid to deliver all of its services there, “according to the specifics of the Cuban market,” the holding company said Thursday.

The move comes as the Obama Administration has said it will restore diplomatic relations with Cuba and favors ending the U.S. trade embargo, although that would take an act of Congress.

A number of current House and Senate members oppose lifting the ban. The UK has not had an outright ban on trade with Cuba, but exports have been small — 20 million British Pounds or less in recent years. Recently, British delegations have met with Cuban counterparts to discuss boosting trade between the countries.

Earlier this year, WPP negotiated a contract with the state-owned Palco Group. The result: WPP now has a permanent executive based in Havana’s main business district “who will be backed by an established local support team. This marks the start of the inclusion of the largest island in the Caribbean in the list of 112 countries in which WPP operates.”

WPP has also been in contact with a number of Cuban agencies and enterprises in the hope of establishing “partnership and cooperation agreements” for services including Data Investment Management, Public Relations & Public Affairs; Branding & Identity; Healthcare Communications; Direct, Digital, Promotion and Relationship Marketing, among others.

The holding company said it expects to begin providing services “in the near future.” It has also begun advising international clients about entering the Cuban market.

WPP expects the Cuba market will expand rapidly in the future, and it anticipates that its own businesses there will contribute significantly to the $1.6 billion it now generates from the Latin America market.