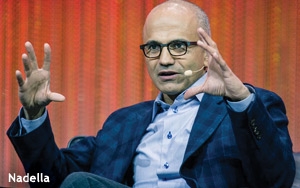 As part of a broader strategic realignment, Microsoft announced plans on Thursday to cut roughly 7,800 jobs. The bloodletting will mostly impact the company’s phone business, which has been adrift for some time.

Per the downsizing, Microsoft will take an impairment charge of about $7.6 billion related to assets associated with the acquisition of the Nokia Devices and Services business, along with a restructuring charge of $750 million to $850 million.

In a letter to employees on Thursday, CEO Satya Nadella said Microsoft would be refocusing on what the company has historically done best: software.

In the near term, that means running a more effective phone portfolio, with better products and speed to market given the recently formed Windows and Devices Group, according to Nadella.

The announcement is part of a broader strategic shift going on at Microsoft.

Late last month, the company signed a deal that gives AOL responsibility for the majority of its display advertising. Microsoft, in turn, is shuttering most of its display ad business, and handing over parts to AOL and AppNexus.

Nadella said the staff reductions would transpire over the next several months.