Loving The Smell Of Burnt Rubber, In A Bottle 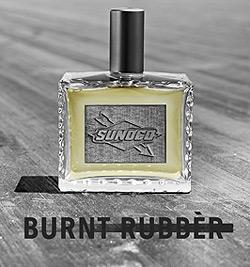 Sunoco-- the official fuel provider for NASCAR and National Hot Rod Association (NHRA)-- and its agency Allen & Gerritsen (A&G) are driving Sunoco’s motorsports sponsorship onto a new platform called the "Essence of Racing.”

The concept plays off the different meanings of “essence” including the smell of the sport.  That led to the idea of bottling the “essence” in a spoofy his-and-hers fragrance called “Burnt Rubbèr,” (last word pronounced rub-bear with a pseudo-French sounding accent on the second syllable) along with videos that poke fun at mainstream perfume ads and make sure everyone is on the joke.

This "exclusive and limited-edition" scent is not available in stores. Rather, the scent is given away to fans via Sunoco’s social media channels. According to the agency,  "You can't buy it. You can only win it. Just like the checkered flag from a race win.”

The new fragrance is supported with a campaign that includes broadcast, print, digital, social, PR and at-track activations. The effort first launched with 30-second spots on Memorial Day, during the Indy 500, the Coca-Cola 600 and NHRA Kansas Nationals and will continue throughout the summer. Ads feature three well-known NASCAR, IndyCar and NHRA drivers: Jimmie Johnson, Graham Rahal and Courtney Force, who were selected in part for their ability to drive participation by promoting it on their massive social networks.

The initiative also includes premium mailers containing the fragrance along with checkered flag-inspired tissue paper and tire mulch. And at-track activations provide a way for fans to experience the fragrance.

One challenge: The smell of rubber isn't easy to bottle. The lead time on testing and fragrance production was about a year.

Already, the campaign's total impressions across various media channels total more than 233 million. And the number of times someone engaged with the campaign (video views, social media interactions, site visits, at track) so far totals 6.9 million.

A&G has been Sunoco's AOR since 2009. Sunoco is among the largest domestic distributors of fuel in the U.S., serving Exxon, Mobile, Valero, and Chevron branded motor fuel. The brand also operates more than 6,595 U.S. convenience stores and serves as the official fuel provider for NASCAR and National Hot Rod Association (NHRA).